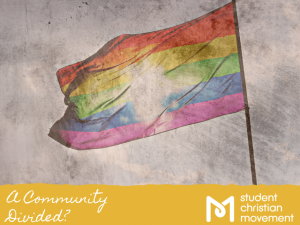 Speaking as someone who has grown up in the Methodist tradition and still proudly calls themselves a Methodist, recent events at the United Methodist Church General Conference (UMCGC) have saddened me deeply. For those of you who aren’t clued up on Methodism, ie. most people, the United Methodist Church (UMC) is an American-based organisation that represents Methodist churches across America and overseas. In terms of international reach, the UMC is a pretty big deal; hence, the UMCGC’s decision on whether to allow same-sex marriages in Methodist churches was followed avidly by the international Methodist community. Excuse the jargon that follows, but I think it’s important to set out exactly what happened and why I believe that the UMC have alienated a huge number of clergy, members and churches.

At the UMCGC this year, different sections of the UMC proposed a number of different plans for how the Church should move forward concerning the issue of same-sex marriage and LGBT+ participation in Methodist churches. This means changing the ‘Book of Discipline’ by which the UMC is run. The three plans at the centre of this debate were the following:

Of these three plans, the Traditional Plan was the only one to pass. This means, of course, that same-sex marriage is not allowed in Methodist churches across America and overseas. It also means that a great number of LGBT+ clergy and members will either leave the Church individually or form another church. In passing the Traditional Plan, the UMCGC put limits on their notion of community. Either of the other plans would have allowed for a diversity of opinion within the Church. Yet, both plans were rejected. The UMC, then, have voted to exclude rather than include. However, the decision was a democratic one. Despite two-thirds of the Methodist clergy from America being in favour of the One Church Plan, overseas delegates swung the vote to a count of 53.28%. Some otherwise liberally-minded UMC members have subsequently suggested that African churches should not have got a vote in the GC. Yet, this is just another form of exclusion! In both cases, one might question what happened to the ‘Four Alls of Methodism’.

The only way for a united church to survive is to allow a diversity of opinion which does not judge or punish an individual’s beliefs, and to let individual churches decide what approach to take towards same-sex marriage. This ‘One Church’ or ‘mixed economy’ approach to same-sex marriage is, I believe, the only way forward for the Church without alienating a significant section of the denomination. Let’s hope that the Methodist Church of Great Britain bear that in mind when discussing similar issues at Conference later this year.

Written by Nathan Olsen. Nathan is a member of SCM Leeds, and currently studying for a BA in Politics.