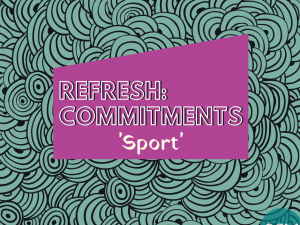 How do you feel about the relationship between sport and faith? Personally, I’ve always been sports mad whether it’s playing it or watching it. Others hold the opinion that sport is full of overpaid prima donnas, supported by a bunch of hooligans. Throughout history, the relationship between faith and sport has been an interesting one, to say the least. In the nineteenth century a movement known as Muscular Christianity emerged, which, despite its ills, did play a fundamental role in making sport popular. Initially through creating recreational time in public schools to improve the discipline and character of the students, and then later through churches working in poor industrial areas who used sport to get young people to do something productive and to keep them away from causing trouble. The movement believed that the positive influence of sport could be transferred to other areas of life, too. However, by 1930 Christian attitudes were changing. As sports became more commercialised, gambling and professionalism meant that ‘stars’ emerged, and the 'innocence' of sport was changed.

So, should Christians involve themselves on something that is so focused on results and performance, where the winner takes all? I believe yes! Christ’s example was to go to all people, including those involved in sport - those at the grassroots as well as the elite.

According to Sports Chaplaincy UK, the community called sport is around 25 million people - just below half of the UK population. The Sports England 2016/17 report stated that 55% of university students participate in sport at least once a week, which would indicate that of the 2.32 million students studying in 2016/17, 1 million students were participating in at least 30 minutes of sporting activity each. At the beginning of this new year what an opportunity for all Christians involved in universities to support, care for and connect with this community!

When I started working in university chaplaincy I was given a brief to connect with students to help build community. Two years went by trying to connect by doing different events in the chaplaincy with limited engagement from students. Something clearly wasn’t working! After some conversations with key people suggesting that most students engaged with sports in some way, I decided to start providing oranges and water to the sports teams on Wednesday afternoons. The relationship has taken time to develop but has meant that the chaplaincy is now building community by being pastorally and spiritually with those who may not naturally have any connection with Christianity otherwise. The feedback that we’ve received from those sports students is that they were pleasantly surprised that the chaplaincy would serve in this way – our outreach has made chaplaincy more accessible, and not just for religious people. We are called to be Christ’s hands and feet in the world, and sports is a great way to connect with the university community. You don’t even have to be good at sport! You just need to have the heart to serve people.

Written by James Wallace, Chaplain at the University of Chester.

The New Normal?
When Doing Nothing is the Right Thing To Do
Renewed and Rebellious: What I Learned from JPIT’s 2020 Conference