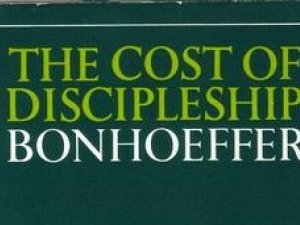 A while ago, my colleague Ellis asked me to write a blog about ‘costly discipleship’, which is a phrase Dietrich Bonhoeffer used. In Bonhoeffer’s view, there could be no Christian faith ‘without discipleship’ and this meant a ‘costly’ following of Christ. When Bonhoeffer said that Christ calls us to die, he could have meant it in a spiritual sense - we have to die to ourselves before we can truly follow Christ. This is absolutely true, but there’s another way in which it is equally true, and Bonhoeffer knew this better than anyone. When we follow Jesus, we are in danger of losing a great many things – our comforts, our livelihoods, our peaceful relationships with others, and even our lives.

You may think this sounds far-fetched, but there are many people in the world even now who are at risk of losing their lives because of their religion. Many well-known people have lost their lives in recent history, because of their authentic Christian faith: Bonhoeffer himself died a martyr at the hands of a vicious Nazi regime against which he spoke out; Oscar Romero was murdered in El Salvador because, like Jesus, he spoke up for the poor and voiceless; Martin Luther King died because he was faithful to Jesus’ teachings and spoke out against militarism, racism and other systems of oppression.

I’ve been thinking recently about what ‘costly discipleship’ might look to us here in Britain. In the Quaker ‘Swarthmore Lecture’ book about sustainability and spirituality called ‘Costing Not Less Than Everything’, Pam Lunn says that we are careering towards catastrophe for the planet if we don’t start expanding our minds enough to conceive of a world beyond our lifetimes. This is a form of dying to self and coming to terms with our own mortality. If we can’t imagine our own death, and life beyond it, we won’t be able to make the sacrifices here and now that are needed to ensure the ongoing existence of the planet, both now and for generations to come.

I was listening to the radio a few weeks ago and heard Professor Stephen Hawking speaking about how humans are in the process of trying to find other habitable planets. It made my heart break and I couldn’t put my finger on why until, during a time of quiet meditation when I was looking at a beautiful tree outside, I suddenly realised: I don’t want another planet, I want this one! I thought to myself, ‘Have scientists really given up on saving this incredible planet already? Is the earth only important if it’s useful to human beings and not because it’s beautiful in itself?’.

In Luke chapter 16, Jesus tells the parable of the ‘Rich Man and Lazarus’. The Rich Man has far more than he needs, and yet despite this, gives nothing of what he has to the poor beggar Lazarus. After death, Lazarus ends up in the ‘bosom of Abraham’ while the rich man ends up in ‘Hades’ (the place of death). In Matthew chapter 25, after a similarly hard-hitting parable about sheep and goats, Jesus says that when it comes to the time for judgement, he will regard those who helped and gave to ‘the least’ as if they had given to Jesus himself. Both of these parables are warnings to us as a ‘Rich Man’ of the West. We are too privileged and comfortable. We own too much and we consume too much, and the world can’t cope with our unsustainable way of life. Yet, when those who have nothing come to us for help, we turn them away.

Costly discipleship for us in Britain today means completely turning the debate on the environment and refugees upside-down. It means that, instead of starting from a place where we say, ‘I don’t want to give up my lifestyle’ or ‘I’m afraid of what will happen if we let them in’, we move to a communitarian, relational and self-giving response like, ‘What can I do to help my fellow human beings and the planet?’. In one way, it may not cost us everything, but then on the other hand, maybe it will.

Tags:
Bonhoeffer
Refugees
< Back to all blogs