The Courage to Be: Against Guilt 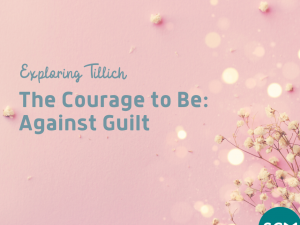 Well done, you’ve made it. This is the third and final piece in my series of articles about Paul Tillich’s “The Courage to Be”. We’ve looked at the anxieties of death and meaninglessness, and now we’ll look at the anxiety of guilt. I’d like to think the subject matter got cheerier as I went through Tillich’s types of anxiety, but I would be kidding myself. What Tillich writes about is existential, radical, and somewhat uncomfortable to think about. Participating in God knowing that you will die one day? Believing in God whilst knowing that life is meaningless? It’s difficult and, sometimes, unconvincing. Yet, I hope that my reflections on Tillich provide, at the very least, a ray of hope in these strange and disturbing times.

Having dealt with death and meaninglessness (as much as you can realistically do that in 1000 words!), this blog looks at the anxiety of guilt. Tillich writes that this anxiety is “present in every moment of moral self-awareness and can drive us towards complete self-rejection, to the feeling of being condemned”. Essentially, we can become paralysed by not knowing what is right and wrong. Even when we feel like we have done the right thing, we worry that we have made an error of judgement. This is necessarily linked with the anxiety we looked at in my previous piece; if we cannot find a source of meaning, how we can find a source of morality? In our age, the anxiety of guilt is almost as prevalent as the anxiety of meaninglessness. Despite our own personal efforts, we are overwrought by the guilt we feel for the current state of the planet. Within organised religion, many people feel guilty for not matching their religion’s definition of a true believer. This is despite the fact that such people have done nothing wrong. How do we overcome this anxiety of guilt?

To overcome such anxiety, Tillich writes, we must revisit the “courage of confidence” – the notion of existing “in spite of” massive anxiety. Yet, where does this courage come from? “It is rooted in the personal, total, and immediate certainty of divine forgiveness”. Tillich argues further, that this courage is itself “the courage to accept oneself as accepted in spite of being unacceptable”.

This courage is what Tillich calls “the courage to be”. It strikes at the heart of all of his work. It says, “we will die, so we live”, “we doubt everything, so we believe”, “we are guilty, so we are forgiven”. This notion returns to the “absolute faith” I talked about in the second part of this series. Tillich is fully aware that death, meaninglessness and guilt are prevalent realities. He does not ignore them. He does not invalidate them. Rather, these feelings are recognised, accepted and overcome. The legitimacy of such feelings is not challenged but rather overcome by still acting “in spite of”.

We are guilty of many things. Inaction, dishonesty, selfishness. Yet, we are forgiven for these sins. We struggle to find meaning in the world. Yet, God is still there. We worry about the future. Yet, we continue to fight for it.

I have loved writing this series. It has made me sad at points and given me headaches. Yet, it has also given me a great deal of hope for humanity. I hope it has given you some of that hope too!

You can check out parts one and two of this series on our blog.