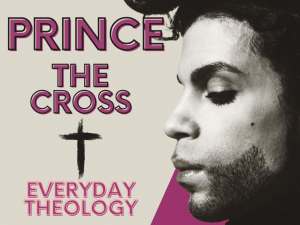 Prince was one of the eighties greatest stars and the androgenous icon of electric guitar pop, rock and R&B. After creating multiple albums of critical acclaim, including Purple Rain, in 1987 Prince released his nineteenth studio album: Sign o' the Times (often illustrated as Sign "☮" the Times). According to Time Magazine (2016), although raised a Seventh Day Adventist, Prince became a Jehovah’s Witness in 2001. He would go door-to-door handing out leaflets and discussed God with strangers on their doorsteps and in their living rooms. However, spiritual messages and religious imagery filled Prince’s musical content for many decades before his conversion. Most obviously in The Cross, which is track five on disk two of Sign o’ the Times:

No love, no hope in sight

Don't cry, He is coming

Don't die without knowing the cross

The opening verse to this song draws inescapable links to Psalm 23, The Divine Shepherd: “even though I walk through the darkest valley, I fear no evil” (NRSV). The Bible speaks emphatically about the omnipresence of light and how it represents God’s steadfast love for all humanity. However, when days seem dark and hopeless the mercy of God is rarely clearly seen pushing apart the ashen clouds to comfort us. Sadness, fear, anxiety and loneliness can all feel overwhelming when the road ahead is filthy with regrets, guilt and the soot of burnt bridges. They sprinkle our paths with insecurities and suspicion, sadness and aching, and with a fear that had not existed before.

However, in Mary Stevenson’s poem, Footprints in the Sand, the narrator walks a beach with the Lord watching as scenes from their life appear in the sky. “In each scene I noticed footprints in the sand”, sometimes two pairs and other times only one (Footprints in the Sand, n.d.). The moving pictures in the sky showed that during the narrator’s most difficult times in life, when they felt most hopeless, defeated and distressed, there was only even one set of footprints. So, they ask the Lord beside them, “when I needed you most”, where were you?

This idea that “the Lord is near to the brokenhearted” (Psalm 34:18) is so difficult to comprehend. How can we know that we are not alone if we do not feel love for ourselves or loved by those we know or, perhaps, we fear that God no longer loves us either? Stevenson answers this question simply. The Lord affirms that “the times when you have seen only one set of footprints, is when I carried you” (Footprints in the Sand, n.d.).

The writer of Psalm 23, together with Stevenson and Prince, has a distinct understanding that hope can always be found and we can always feel loved even on black days and stormy nights; “for You are with me” even when I fall, freeze and blunder foolishly or quite monumentally (Psalm 23:4).

The third line states that “He is coming”. This is a reference to the Parousia of Christ (the Second Coming). At the end of The Apostles Creed it states that Jesus “will come again to judge the living and the dead”; for some Christians (including Jehovah’s Witnesses), salvation cannot be achieved without faith in Christ and, thereby, knowledge of the cross. According to Acts, Christ will return to earth “in the same way… you saw him go into heaven” after his execution (1:11), returning only with the intention to end the world as we know it. As to when this day will come, no one knows (Matthew 24:42). In the meantime, all we can do is try to follow his teachings and keep our hearts grounded in faith.

Ghettos to the left of us

Flowers to the right

There'll be bread for all of us

If we can just bear the cross

Flowers, often used as a symbol of both remembrance and mourning, represent here the loss of life due to poverty. Imagine standing on a road, that road of soot and regret: on the left side of the road the sky above grey ghettos is stormy, on the right side of the road the bright petals of fresh flowers fall and wreaths hang on fences. The colours of mourning do not change the reality of poverty opposite it. Flowers will not change the past. Clean water, however, will restore those wilted by disease and drought and food will feed the hungry.

From the Feeding of the 5000 (Mark 6:30-44) to the Last Supper (Luke 22:14-23), a surplus of food is often represented in the Bible as heavenly. Manna is a fine white flake that tastes like “wafers made with honey” (Exodus 16:31). First referenced in Exodus, it was gifted by God to the Israelites to sustain them during their escape from Egypt through the desert. Psalms also recalls that God gave Jacob and his people “the grain of heaven” when He allowed manna to fall from the sky (Psalm 78:23-24). Additionally, when manna is baked into dough it becomes known as the bread of Heaven or “the bread of God” which “gives life to the world” (John 6:33). This is important because both the Feeding of the 5000 (a number that does not include women or children) and the Last Supper can be understood as accounts of the miracle of manna.

Christ feeds thousands of hungry people in the desert with a basket of only five loaves and two fish. Yet he also gifts us the opportunity to ourselves find Heaven’s bread through him. Often referring to himself as “the living bread” (John 6:51) and “the bread of life” (John 6:35), Jesus offers himself to the disciples at the Last Supper. “This is my body” (Luke 22:19), “those who eat my flesh and drink my blood abide in me, and I in them” (Luke 6:54-56). Food, specifically bread, plays a powerful role in biblical scripture as the faithful “will never be hungry” (John 6:35). Some scholars believe that the phrase "give us this day our daily bread" from the Lord’s Prayer refers to manna and God’s desire that we trust that He will continue to sustain us, day by day, just as Christ did in the desert.

She lives in starvation

Her children need all that she brings

In September, SCM joined the Quaker Roots vigil against the DSEI Arms Fair in London. While there, the account of a refugee from Yemen was read. She discovered she was pregnant mere weeks before war broke out in her home country. The joyous occasion of new life became the primary source of her dread as she questioned the world her child would be entering and if she would survive the next nine months to find out.

In the book, The Colour Purple, protagonist Celie proclaims that “this life soon be over, heaven last always” (BaileyHernandez9, 2014). While this comment represents the character’s faithfulness and trust in God, it is this sentiment that persuades her to endure the horrors she is put through at the hands of others. She accepts her suffering because life is temporary, however, that should not be used to justify submission: we can stand up for ourselves, we can escape bad situations and we can live an equally short but, nonetheless, happy life. Heaven was not built as a haven for the unhappy. We do not need to suffer needlessly in order to be good and thoughtful people. A pregnant mother does not need to cry, or her children starve. It is something we allow to happen as a society and as a world.

Similar to scripture’s focus on bread as heavenly sustenance, banquets are often linked to salvation. Christ explains that there will always be poor people (Deuteronomy 15:11), but with faith they “will never be hungry” (John 6:35) because they will “eat in the kingdom of God” (Luke 13:29): “a feast of well-aged wines” and “rich food filled with marrow” (Isaiah 25:6). However, that is Heaven; this is now. There are people who need more help than you and I alone can give them but together we have the potential to change something for someone for the better. When the angel Gabriel said to Mary, “do not be afraid” (Luke 1:30), he was talking not just to her as the Immaculate Conception but to every pregnant mother, starving child and frightened person who will need the kindness and trust of others to help them through. As it is written more than once in scripture, “when you give a banquet, invite the poor, the crippled, the lame, and the blind” (Luke 14:13). They too deserve to taste Heaven and walk through bright flowers under clear skies. Yet, it is they who suffer more than is necessary in life.

Food justice is a right owed to all living things; food poverty is the reality that many live.

To end this first Everyday Theology blog, please spend some time thinking about how your faith informs you when you’re down. Is music where you find joy? Or is it reading scripture, being active, being artistic, baking, playing games, watching films or seeing loved ones that clears the sky for you? Equally importantly, consider how you support the hungry in your society. Do you volunteer at shelters or donate to food banks? Many supermarkets now have a large bucket you can put food into which they donate on the behalf of customers. With millions of children in the UK getting free school meals and families across the country living in some form of poverty, as we near the Christmas holidays, think about how you can help those in need both as an individual and by joining a collective. No one’s day should be blackened by starvation. No one need go hungry. So, please, with the cross in mind: think, pray and take action.

Take a listen to Prince’s song Sign of the Times (linked here: Sign 'O' the Times - YouTube), which was released during and in relation to events of the 80s, including the Challenger Space Shuttle disaster and AIDs crisis. Is the song still relevant today?

(The song's title shares it's name with a Seventh Day Adventist Magazine designed to guide religious readers though contemporary life).

Why you should Rock the Red Ribbon this World AIDS Day
Sorting the Fact from the Fiction
Why Wear a White Poppy?