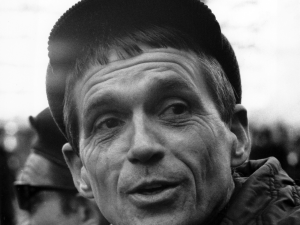 The passing of Daniel Berrigan (1921-2016), Jesuit priest, poet and peace activist, will be mourned by many around the world. His life of faithful witness to the gospel message of peace continues to inspire and challenge. Through his writings and actions, Berrigan wrestled with how to follow Jesus' nonviolent teachings in a violent world. A calling which led to his numerous arrests and appearance at the top of the FBI's Most Wanted list. While it is possible to write whole books on Berrigan's exploits - which many have, including Berrigan's autobiography 'To Dwell In Peace' - I leave this task to others. Instead I wish to briefly reflect on his remarks at the 1973 Student Christian Movement 'Seeds of Liberation' conference, in Huddersfield.

In 1973 Berrigan had recently been released from prison in the United States, having been charged for burning draft files in protest against the war in Vietnam. In speaking to the SCM he drew on his experience in attempting to speak about how students of faith could resist the violence and corruption of the world. For Berrigan, remembering to continuously return to scripture is a helpful way of clarifying our thinking and recalling our vocation: "Sometimes we suffer from too much history, too much theology and too many teachers, and to get back to scripture can be such a great relief..." Taking the book of Revelation as the basis of his reflections, Berrigan explored what it looked like to maintain "sanity in the face of the beast." He maintained that the powers and principalities which govern our world - the beast - foster violence and seek to destroy all that gives life.

The challenge for people of faith is to form what Jim Forest called "communities of resistance", spaces in which it is possible to tell alternative truths and struggle for a better world. In reflecting on Revelation and the geo-politics of the 70s, Berrigan noted that there is a fine line to walk between a fundamentalism - which takes biblical metaphors literally and avoids the realities of the world - and a liberalism which tames scripture and believes that all will be well.

Our task is to recognise the truths contained within scripture, often expressed in images and metaphors, and to utilise these in resisting the beast. Community is central to this task, we cannot do it alone. Communities help to sustain us for the long haul by reminding us that we are not alone or wrong to believe that things can and should be different. The hallmark of these communities, says Berrigan, are "laughter...tears...patience" as they help to break the grip of the beast upon us. Within the Christian tradition, Berrigan argued that that the Eucharist is central to community: "The Eucharist is a whole way of life." In sharing communion, Christians remember Jesus' own nonviolent struggle against the powers of his time. They recall the communion of saints, the traditions, that proceeds them. And in doing so we are called to continue both in the present. Community is central to resistance. For Christians, communities centered on Jesus.

Daniel Berrigan's life is an example of what is looks like to live with integrity. To live a faithful witness to Jesus' teaching. In his addresses to the SCM he taught the importance of scripture and the centrality of community. For me his examples, words and questions continue to shape my faith. I wonder who inspires you? What communities sustain you? How does the Bible shape your thinking and actions?

As a poet Berrigan expressed many of his deepest truths in verse. Following his arrest in 1968 he wrote these lines:

"Peacemaking is hard,
hard almost as war.
The difference being one
we can stake a life upon
and limb and thought and love."

Thank you for your witness Fr. Dan.

May you rest in peace and rise in glory.

Tags:
Theology
Activism
Faith in Action
< Back to all blogs

Waiting in Hope: A Look Back at the National Gathering
Optimism and Hope
Congratulations to the Methodist conference!