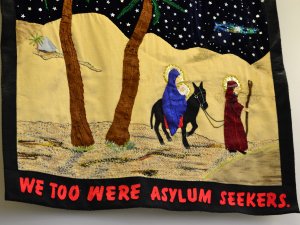 The Bible, being a history of God’s people, is in many ways a book about those who are displaced, lost or cast out. This is clear from the beginning. Whether it be being cast out of the Garden of Eden, exiled in Egypt or lost in the desert, surrounded by foreigners, the people of God have had lots of experience when it comes to being strangers in a strange land.

As a banner hung in the main room of St Chad’s Sanctuary Birmingham humbly reminds us, even Jesus was an exile in Egypt. Our heritage as Christians is one of displacement, even if that does not marry up with our day to day experience.

According to the Red Cross there are 126,000 refugees living in the UK at this time. That’s a tiny proportion of our total population, but it’s more than small, hardworking organisations like St Chad’s can handle alone. In 2015 St Chad’s gave out 3,887 bags of food and 32,199 items of clothing to refugees struggling with poverty in the West Midlands. Nearly half of those people would have been under the age of 30.

God’s attitude to those who we might see as outsiders is consistent and clear in his teachings. In Exodus 22 Moses instructs the Hebrews to ‘not wrong or oppress a resident alien, for you were aliens in the land of Egypt’. Indeed Deuteronomy 24 tells us not to deprive a resident alien of justice, and in chapter 10 we are told God ‘loves the strangers, providing them food and clothing’.

It doesn’t end with the Old Testament. Jesus himself in the book of Matthew claims that to welcome or reject a stranger is to welcome or reject the son of God himself. If we were to compare the Bible to today’s media we would get two very different views. Many media outlets in this country are extremely negative towards outsiders. We have all seen the pictures in the papers of migrants jumping out of trucks in Calais. Fearmongering is rife, and has coloured the public opinion and rhetoric surrounding refugees.

It is important then that we as young Christians make a deliberate effort to combat this kind of rhetoric. Mainly for the sake of the refugees and asylum seekers themselves, but also for the sake of our society. Are we an insular people, ready to scapegoat those who are driven to our country by poverty, war or prejudice, or are we the kind of people who practice hospitality and acceptance on a national scale?

We get to make that decision. With all things, even little steps, like volunteering with local charitable agencies, can be a help. Here in Birmingham the charity ‘Restore’ runs a befriending programme. Why not see if a local charity near you has similar services?

Befriend an asylum seeker or refugee, hear their story and see what you can do to make a change for them. Above all else, take Jesus’ words to heart: if you speak out for the strangers in society, you are speaking out for him.

Ben Atkinson is a graduate of the University of Birmingham, works in a call centre and worships at St Francis Church, Bournville. You can read more about the refugees campaign day of action here.

Tags:
Faith in Action
Refugees
Asylum Seekers
< Back to all blogs