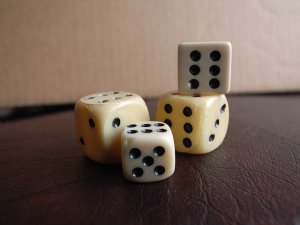 I find the balance between people saying 'you deserved that' and 'you're so lucky' a difficult one. Recognising that someone has worked hard for their achievements combined with acknowledging that actually they were in a position to be able to achieve in the first place, can be hard to justify. I worked hard for my degree, but I grew up with access to free education, had a supportive family, it was financially viable for me to go and I didn't generally have major health concerns.

Throw the idea of what a blessing is and acknowledging privilege into the mix and I'm not sure there are any answers. Then there's the question of if you deserve the good, do you deserve the bad?

I remember in my first year at university calling home about something that had happened and referring to it as 'lucky' and my Mum saying “That's not lucky, that's a blessing.” This is another concept that I struggle with. If it's a blessing from God when good things happen, do we then blame God for the bad things?

I believe that we're saved by grace, not by our own works. And to me, receiving blessings as heavenly rewards seems slightly at odds with that. Do we earn God's favour? On the other hand, especially in the Old Testament, there's examples of 'do as you're told and God will bless you', for example the Israelites and Canaan where God says do this very specific list of things and I will give you the world.

It seems a bit prosperity gospel-ish (wiki definition: Prosperity theology is a Christian religious doctrine that financial blessing is the will of God for Christians, and that faith, positive speech, and donations to Christian ministries will increase one's material wealth.) to me, which seems to be a step away from saying 'if you're poor, or ill, or suffering you're to blame' which personally I am very uncomfortable with.

I don't know any answers, I think that's part of faith, but I also think it's important to ask these questions.

Tags:
Deepening Faith
Student
< Back to all blogs