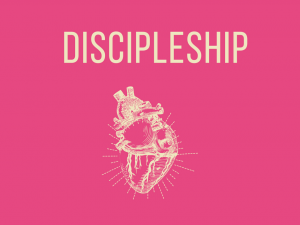 This month’s theme is discipleship. But before we dive in, what even is discipleship? It’s one of those words that gets bandied about a lot, and it can have different connotations for different people. We think that discipleship is taking up the call to follow Jesus, whatever that may look like and however that happens for someone personally. One of our members described it as being a ‘Jesus movement follower’ and we think that sums it up quite nicely! We also think discipleship runs deeply through SCM’s four aims.

Discipleship is a personal thing but it isn’t always private. At it’s very core it involves other people in community together; learning, teaching, walking alongside and encouraging each other in faith. This doesn’t have to look like the traditional church setting (although it can!) Small groups (like SCM groups or faith societies), online communities or a small group of friends who meet together to support each other, pray and read the Bible, talk about and put faith into action through social action- these are all great ways to create community and grow in discipleship.

This is probably what people think of most when they think of discipleship. At SCM we believe that engaging critically with faith is tantamount to growing and deepening our relationship with God, and asking the hard questions is part of this. We draw on scripture, lived experience, theology and church traditions to learn and grow, but fully recognise that people will have their own ways of deepening their faith.

As disciples we’re called to be the salt of the earth & the light of the world, which means we’re leaving things better and brighter than they were before. We're called to help usher in God's kingdom which we believe looks like championing justice for both people and the planet. We want to be a movement for change and be full participants in God’s Kingdom of peace, justice and hope.

We believe that everyone should be involved in discipleship and is welcomed in to being a disciple by Jesus.  Discipleship without diversity is not a true reflection of God's Kingdom, and at SCM we’re proud to champion diversity in all of its forms, welcoming everyone in to be part of the community without reservation.

Over the next few weeks we’ll be looking at each of SCM's aims more deeply in relation to discipleship, so stay tuned and enjoy!