Do Not Hold On To Me: Reflections on Ascension 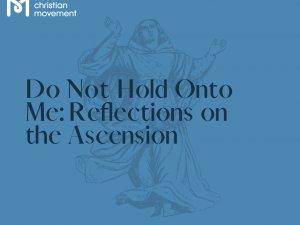 Recently I've been reflecting on the ascension of Jesus – May 30th was the Feast of the Ascension this year, and my Church celebrated it in great style! But what does the ascension have to say to us now? As many of you will know my undergraduate degree was in Biblical Studies, and I find that looking at the biblical text and reading it through carefully as a narrative always leads to fresh realisations. So when I read the ascension narratives in Luke chapter 24 and Mark chapter 16, this is what I noticed:

Seriously, only four verses in Luke and two verses in Mark to describe surely one of the most significant parts of the Gospel? And so bare! Jesus blesses the disciples, withdraws, and is gone. And then they’re joyful about it?I don’t understand. What on earth are they so happy about? My own feeling is that had I been there, I would have wanted Jesus to stay. He rose bodily from the dead so why couldn’t he stay bodily on earth? Why would the people who wept at his crucifixion, and were amazed at his resurrection, be happy about his leaving?

There is also a reference to the ascension in the Gospel of John, in which the resurrected Jesus says to Mary,

Do not hold on to me, because I have not yet ascended to the Father. But go to my brothers and say to them, ‘I am ascending to my Father and your Father, to my God and your God.

Other translations such as the English Standard Version render this ‘Do not cling to me’, which seems like a strange thing for Jesus to say given that the Bible is full of admonishments to cling to or hold onto God:

‘You shall fear the LORD your God; him alone you shall worship; to him you shall hold fast’ Deuteronomy 10:20

Why is Mary not supposed to cling to Jesus before his ascension? Why would Jesus be so cruel to Mary when she just wants to hold him? What does this mean about holding onto Jesus after his ascension? I can only assume that the ascension was an event of such significance that nothing was ever the same afterwards. That the tripartite nature of death – resurrection – ascension is what we should be emphasising; that we should be paying more attention to the ascension when we often privilege resurrection over everything else.

So, what is the significance of ascension? My question earlier: ‘what on earth are they happy about?’ reveals something about this. The disciples aren’t happy about something on earth, they’re happy because they’re witnessing the co-mingling of earth and heaven that this event represents. The poet Malcolm Guite puts it well when he writes:

As earth became a part of Heaven’s story

And heaven opened to his human face.

We saw him go and yet we were not parted

He took us with him to the heart of things

The heart that broke for all the broken-hearted

Is whole and Heaven-centred now, and sings.

It can be hard from the earth to really understand what is so joyful about Jesus ascending. Except if we consider ourselves as co-heirs of the new heaven and new earth. Or if we imagine ourselves to be citizens of the eternal city. Or partners in bringing God’s Kingdom to earth, or any of the other ways we talk about this mingling between earth and heaven, human and divine that the ascension is the beginning of.

Jesus says that he is going to His Father, and to our Father. Only once I had read this through a couple of times did it dawn on me that in saying this Jesus not only affirms our status as God’s children, but it is an invitation to be part of Jesus’ body on earth. Jesus’ ascension means that we are his representatives now, and with the aid of the Holy Spirit we are responsible for showing the love of Jesus to the world.

These are some preliminary thoughts I had when reading the Gospels this week. But I’d like to hear what the ascension means to you. Do you think of it as joyful event? Is it something you celebrate? Why do you think we equate loving with staying? What things are we clinging onto that we know must go? And what do we consider to be an ending that might only be the middle of a story? I'd love to hear your thoughts in the comments below.