Doing Enough? Activism and Protest as a Person of Colour 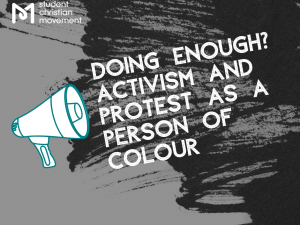 I remember feeling two emotions when I attended a University of Birmingham student-led Black Lives Matter (BLM) protest a few years ago: pride and guilt. I felt proud standing in solidarity with my British peers, knowing the fight against white supremacy was a worthy cause whether in the United Kingdom or the United States. Proud because afterwards my mother informed me that my great-uncles were pleased to hear that I was protesting, but also saddened, because they participated in the Nashville Sit-Ins six decades ago so that I wouldn’t need to. Guilt, however, is the emotion that has lingered on the longest since that day.

I felt guilty because I knew, and my African-American friend accompanying me also knew, that we were lucky. There was no real threat to our safety at this protest, no fear of police dogs, pepper spray, or even police at all. We had made plans to attend this protest in the same way we made plans to grab dinner—"Meet me by the clocktower at 7pm?” “Sounds great!”. I wouldn’t have given any thought to writing down the telephone number of a lawyer, nor did I spend a moment to consider what could happen if I got arrested. I certainly didn’t fear the aftermath of state surveillance, and did not think that any photographs of me would be of interest or my humble apartment flat worthy of a police stakeout, à la Dr. Martin Luther King, Jr. In other words, this particular protest felt safe and offered little disruption to our lives other than a few hours spent away from our theses. The contrast of our experience in England to our BLM counterparts across the Atlantic felt wide and vast. We felt guilty. This guilt sat within a larger, ongoing conversation between my friend and I, the perennial question of, “Are we doing enough?”.

A few months later, I would attend a live-action exhibition on the Greenham Common Women’s Peace Camp, my first time learning of the women’s resistance. The spirit of activism was running wild and in abundance—history has proven there is always something to support, something to care about. My friend and I had chosen our respective causes and could list them at rapid-fire speed: anti-racism; gender equality; trans rights, disability rights, young carers, and on and on. We were throwing around words like “dismantling”, “systems and structures”, and “decolonization”. In the words of Nina Simone, “We never talked about men or clothes. It was always Marx, Lenin, and revolution—real girls’ talk.” Our Sociology 101 professors would have been proud. But was it enough?

To this day, I’m still figuring out how far I want to go. Death - surely not. Getting arrested? Not so sure. I know that police involvement for someone of my race and gender could quickly mean death. The stakes don’t just feel higher for a person of color seeking to engage in activism and resistance, historical precedence clearly shows the stakes are higher. Indeed, this remains true for any person possessing any form of a marginalized identity on either side of the Atlantic. With that in mind, here are some tips for people of color activists:

Tips for white activists and friends:

Written by Dr. Feylyn Lewis. Feylyn is a trustee and the Black and Minority Student Representative for Student Christian Movement. She is currently working as a research fellow at the University of Sussex.