Don't Understand Revelation? It's Not the End of the World! 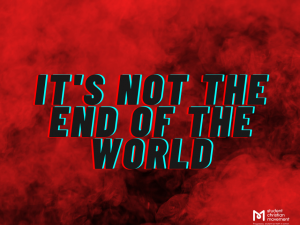 Don't get the book of Revelation? Don't worry - it's not the end of the world.

No, really! I get the impression that lots of Christians avoid the Book of Revelation and leave it to the cranks and the overly-certain readers of symbols and geopolitics. After all, it's all pretty weird and even scary, not to mention ambiguous. Bits of it seem to reintroduce us to the smitey version of God, and can feel at odds with the Christ of the Gospels.

Cards on the table: when I see some of the proposals for correlating the symbols with current events, I tend to think that interpretations like them have been going on for literally thousands of years, so I think the bar for them finding exclusive fulfilment now is pretty high. Not to mention that it should all surely have meant something to the readers and hearers who are addressed in the first chapters. So, it really isn't the end of the world. In any case, looking for a list of purely historical events to tick off in a countdown to doomsday is a misunderstanding of the kind of literature we're dealing with.

It's worth noting that the name of the book - it's first phrase, actually - is "The apocalypse of Jesus Christ..." and 'apocalypse' doesn’t really mean what popular culture has turned it into -a destructive catastrophe. It actually means in that first century context, the revealing of something previously hidden. And this, apocaplytic literature, is a genre. Usually such literature presents a symbolical unveiling of what's going on; an exposé of the hidden forces and purposes at work behind the all-too-visible events of human affairs with a view to asserting that God is working out purposes through it all. It aims to encourage beleaguered and persecuted people to remain true and to await the unfolding of events because God has got their backs.

In the Book of Revelation perhaps the clearest view of this is chapter 12 and maybe 13. Here the intertextual allusions to other biblical passages and apocalyptic literature brings a more readily understood set of symbols than perhaps some of the other chapters offer for newer readers of the Bible. Revelation presumes readers who are familiar with certain parts of  the books of Daniel and Ezekiel principally, as well as other Hebrew scriptures, and even literature that is not in our Bibles but was doing the rounds in the intertestamental period. So the symbols were more readily understood.

In Revelation 12 we have the glorious and pregnant female figure reasonably readily interpretable as the people of God. This bestarred women (note the number of stars hinting at God’s people; representing the number of tribes and/or apostles) is bringing the Anointed (‘to rule the nations …’ picking up prophetic language) to birth, whilst in great danger from the cosmic forces of evil (the dragon -obviously! -As shown by a ‘star sweeping’ tail and with attributes reminiscent of visions in the book of Daniel). We are reminded of a devouring enmity to God’s purposes and people in this imagery.

And we see the age we are in: a cosmic battle. One which is decisively turned by the work of the Child but in this passage is seen by its effects among the spiritual forces that superpose our world. Michael, since the book of Daniel, is the ‘heavenly’ reflex of God’s people trying to live God’s purposes in this world.  The conflict is prosecuted through the faithfulness of Jesus' followers. There is a reassurance here: the forces arrayed against us are potent, fearsome and ancient. But. .. ultimately the reign of God prevails; the key is for us not to go over to the dark side, even though it may cost - perhaps even dearly.

As we become more familiar with this way of communicating, we begin to get insight into the mindset of those to whom it appealed. We begin to see a world with a dual aspect. There’s what we see materially and then there’s what we have to have revealed to us. We glimpse this in many parts of the Bible - John’s gospel and Ephesians are two that come immediately to mind. The point of apocalyptic literature is to help the reader or hearer (remember most people listened and could not read themselves) to understand the cosmic significance of events, especially those events that pressured and oppressed followers of the Way. This literature invites us to be aware of the ‘heavenly’ dimension and to look to understand that God is indeed at work hiddenly and against cruel opposition, and that we are caught up in that struggle - against principalities and powers (to import Paul's language). It’s not the end of the world, but it is the birth pangs of a new creation.

Written by Andii Bowsher. Andii has been a Chaplain at Northumbria University since 2011. He also teaches ministry & mission and oversees special educational needs at Lindisfarne College of Theology, and is currently doing some voluntary work with Green Christians.