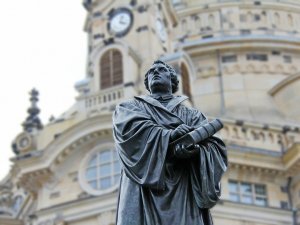 On a day now called ‘Reformation Day’, 31st October 1517, Martin Luther hammers his ‘95 Theses’ onto the door of All Saints Church in Wittenburg, Germany. The theses were summarised by one of my friends recently as ‘gripes against Catholicism’. It is an action that has reshaped the direction of the Church.

I am over-simplifying the issue of division somewhat – there were signs of separation even before the reformation, during the 5th century, the 11th century, and then the 16th century. Whether ‘Reformation Day’ even occurred is disputed by Church historians, but the date is regarded by many theologians as the start of the reformation. As we approach the 500th anniversary, it is clear that the impact of Luther’s actions did not just leave a mark on the Church in Wittenburg but on the wider church, resonating to the present day.

Pope Francis has welcomed commemorations next year, with a trip planned to Sweden to meet leaders of Christians from different denominations. Meanwhile one of the most senior Catholic leaders, Cardinal Gerhad Muller has said it would be inappropriate to celebrate reformation: “Catholics have no reason to celebrate [Reformation Day]…we cannot accept that there exist sufficient reasons to separate from the Church.”

One could even take a more conservative position. According to some, the official attitude of the Church up to the fifteenth century was ‘extra ecclesiam nulla salus’ (outside the Church, no salvation)” (Wansborough, 2013). How then, can the Catholic Church desire unity, as Christ prayed “May they all be one”? Wansborough explains that the Second Vatican Ecumenical Council stretched the meaning and definition of ‘Church’, and thereby the implication of what it means to be Church. The Council promulgated a declaration titled Unitatis Redintegratio or ‘Restoration of Unity’. The document describes disunity as that which “openly contradicts the will of Christ, scandalizes the world and damages…the preaching of the Gospel to every creature”, thereby recognising the necessity for unity. The language used in the document was revolutionary at the time – instead of addressing Protestants as ‘heretics’, the term “separated brethren” was preferred. Christians from other traditions went from being alienated and anathematised to being brothers and sisters in Christ.

The document also outlines that closer unity comes about through moving closer spiritually to God – through the Word and the Holy Spirit. We see this lived out in some of the new religious movements today within the Catholic Church, such as communities like the Chemin Neuf. Although Catholic (with influences from Ignatian and Catholic Charismatic spiritualties), the community brings together married couples, priests and religious consecrated brothers and sisters to live ecumenically with Christians from all traditions.

Last month I was privileged to hear Pope Francis talk to 3 million young people at World Youth Day in Krakow, charging young people to be bridge-builders: “We are here today because the Lord has called us together. […] Let our best word, our best argument, be our unity in prayer.”

This statement from ‘One Bread One Body’ eloquently summaries my personal position on unity, that together we are “‘not strangers but pilgrims’, aware of our divisions and yet evermore committed to finding a way forward together”. Movements I’ve recently been introduced to such as the 24/7 prayer initiative finds a way forward together, realising the call for our shared common prayer (even if we cannot share a joint communion) and towards a shared common life, living in community.

However, what may unify us, like prayer as Archbishop Cordes of the Catholic Charismatic Renewal points out may still pose a challenge “[Prayer] does not occur in an ecumenical vacuum in which the traditions of the various ecclesial bodies are excluded. It may therefore occur at times when Christians pray regularly together, doctrinal differences surface that tend toward disunity. Differences are often experienced in such questions as the intercession of Mary, the communion of the saints, or even with regard to the interpretation of the Scriptures.”

Nonetheless, ecumenism is a desire we must pursue, as the present and future generation of Church leaders; as a young Christian I have many friends who are from non-Catholic traditions – they love Jesus the same as young Catholics.

Tags:
Catholicism
< Back to all blogs