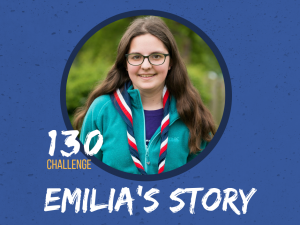 The Student Christian Movement means a lot to me. I've only been involved in SCM for just under a year, yet it already feels like a place I can call home; it's a group of people who understand me and share similar views, who I don't have to explain things to or hide my religion from, and it provides me with somewhere that I can be myself. By taking part in the 130 challenge I feel that I'm doing my bit to help SCM continue to run for years to come. £130 isn't all that much, but as a small charity I know SCM will really appreciate it. Plus if lots of people all raise £130 each that adds up to a whole lot, which will really make a big difference!
For my 130 challenge I'm running a 5k. That doesn't seem all that far, so let me explain.
For the past 9 or so years I've been playing hockey. I started in junior teams before playing in local adult leagues, and last year I was playing for my university in the BUCS league. However, this year I've had to (temporarily) give up hockey for the first time since I started playing. I plan to go back to hockey in the future, but for now I've been trying to find something else to keep me active. I'm a bit useless at most other sports though, and I can’t really throw or catch! Last semester I joined a weekly group of German Longswording that my church was running for a time. People think you're a little odd when you tell them you're waving swords around inside a church, but it was a good laugh as well as keeping me active. I also tried yoga which helped me be stronger and more flexible, but not necessarily fit.
Having not found any particular sport that I could do all year I was looking for something new to try after Christmas. Coventry is the European City of Sport for 2019 so there are lots of things going on, including the Coventry Running Festival in March. I decided to sign up to the 5k run that's part of the festival and ask people to sponsor me to run this as my SCM 130 challenge. Running has never really been my thing, but I thought that the 130 challenge was a good opportunity to try something new and challenge myself - challenge is in the title after all! I'll need to try to fit in training between university and my other commitments as I'm not particularly fit at the moment due to not playing sport regularly. I plan to use my training time to listen to some Christian music and podcasts too, to remind me why I'm doing this.
After I’ve run my 5k I may also give myself another challenge for the second half of the year, so that my challenge spreads further across the whole of 2019. I don’t know what this will be yet, but I might try make it fit closer to the 130 theme (seems I’ve already got the “challenge” bit covered), and do 130 of something (whatever that ends up being!). Current ideas include crocheting 130 of something for a specific charity campaign or writing 130 recipes.

What will you do for your 130 challenge? Sign up today!

Written by Emilia de Luca, an SCM Member in Coventry.