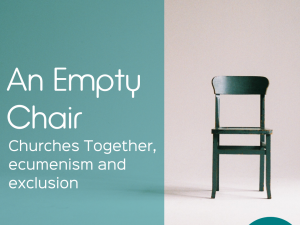 I was deeply saddened this week by yet another example of homophobia in the church. Churches Together in England have made the decision that the only way they can continue to work towards unity between the churches is to block the Quakers’ nominated president, Hannah Brock Womack, from taking up this role due to the fact that she is married to someone of the same sex as her. Rather than replacing her, they have decided to leave the chair empty for the duration of her presidency.

I find the image of the empty chair incredibly powerful. It represents all the ways in which LGBTQ+ people are absent from the church – blocked from leadership roles, excluded from decisions which involve us, or just being made to feel so unwanted that we drift away and stop showing up. It is immensely difficult to continue to want to be involved in the church when your identity is treated as an issue to be solved rather than something to be celebrated, or just as a neutral part of who you are, as straight and cis identities are assumed to be. It can be easy to forget, when we spend our time in progressive and accepting Christian communities, how far we’ve come and how far we still have to go.

This decision also seems to fly in the face of the commitment to ecumenism which supposedly is the foundation of organisations like Churches Together. Division in the church has caused untold harm throughout history, and shown us to be hypocrites while preaching a gospel of love and grace. Joining together despite our differences should be at the heart of ecumenical movements, not excluding people until we can get the rest of the church on board with accepting them. And whenever this problem persists, it is rarely marginalised people or affirming, progressive churches for whom allowances are made or who dictate who is allowed in or out (and nor would most of us want to); rather, the church has a tendency, through action or inaction, to take the side of the ‘traditional’ or status quo views. Our seats are to be left empty so that they can continue to occupy theirs.

What the church needs to hear, I think, is that an empty chair doesn’t mean LGBTQ+ people are out of the picture; this is not about an issue you can find a way to resolve later on, but about people whom you are called to find a way to love. Unity has never been about assimilation or hegemony, but joyful acceptance of the diversity of creation. Ecumenism is struggling to live alongside those who live out faith differently to us, exploring and learning from the conflicts we find there rather than denying and avoiding them. At SCM we are passionate about persevering with this journey towards celebrating diversity, and we remain hopeful that the members of CTE and churches around the world will join us.

Tom Packer-Stucki, convenor of SCM's General Council, has made the following statement on behalf of the Board of Trustees in response to this decision:

"As representatives of our Christian student membership, we stand in solidarity with Hannah Brock Womack and the Quaker movement in this difficult time. As a Christian movement which aims to celebrate diversity, we are disappointed that CTE have taken this decision. We would like to echo the words of Paul Parker, the Recording Clerk for Quakers in Britain who says, “We value equally all people, regardless of sexuality or other defining characteristics. These characteristics are not the right way to decide if someone is right to serve as [...] CTE President.” However, we welcome the fact that CTE have recognised the importance of this issue, and hope that they will work together ecumenically to reach agreement about LGBTQ+ inclusion that is truly inclusive.

There is a wide range of Church tradition and theology represented within our student membership, but we unequivocally support the inclusion and representation of LGBTQ+ people in Christianity. As young members of the Church, we urge leaders from all denominations to come together and forge a safe and inclusive future in which all can participate, just as we are all one in the love of Christ Jesus. We believe that LGBTQ+ people have something special to offer the body of Christ and are therefore proud to enable and endorse the inclusion of members of this community, of which many of we ourselves are a part, in Christian organisations and life."

Tags:
LGBTQIA+
Ecumenism
< Back to all blogs