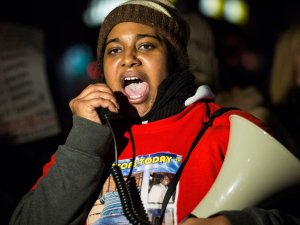 Most of you won’t know Erica Garner, but perhaps you should. She was a shining example of someone who was committed to justice, truth and love in the face of overwhelming oppression. She passed away last Saturday from a heart attack and a subsequent coma at the age of 27 and the world is poorer for it.

Back in 2014, Erica’s father died after resisting arrest by the New York Police Department and being placed in an illegal chokehold. Erica was thrust into the spotlight and the forefront of the Black Lives Matter movement as she fought for justice for her father. Eric Garner’s dying words ‘I can’t breathe’ became a slogan for the movement as Erica led demonstrations and 'die-ins' outside the New York State police department building. Erica soon found herself being inundated with requests to speak in schools and meetings and she toured the country speaking up for all victims of police brutality.

Erica was never the ‘activist type’ but fought for her father and other victims of police brutality in the U.S with grace and diplomacy. That is not to say that she was perfect. No activist is. Yet, her contributions to the Black Lives Matter movement were considerable. After a grand jury declined to indict the officer involved, the Garner family brought a wrongful death lawsuit against New York City, winning a $5.9 million settlement. In a Tweet after her passing, her family described Erica as a ‘human: a mother, daughter, sister, aunt… She pursued right, no matter what. No one gave her justice.’

When I reflect on Christianity and the state of race relations, as a white Christian all I can do is lament. In the Jim Crow era, white supremacist Christians thought nothing of the parallels between our Saviour dying on the cross and black bodies being hung from trees. Today factions of white evangelicals in the U.S continue to oppress their black brother and sisters and elect outright racist candidates. It would be easy to say, ‘that’s not my country’ or ‘that’s not true Christianity’ (which it isn’t), but we are all connected. We are one body in Jesus Christ.

Yet, God is out there doing great works despite of us. Erica showed that in her faithfulness and persistence. Revd. Al Sharpton described her as ‘a fearless outspoken activist that never stopped fighting for justice for her father’, while Bernie Sanders tweeted ‘Though Erica didn’t ask to be an activist, she responded to personal tragedy of seeing her father die while being arrested in New York City by becoming a leading proponent for criminal justice reform and an end to police brutality’.

Erica has left two small children behind and a family marred by more tragedy than anyone should ever have to bare. They need your prayer, yet much more they need action.

What can I do?

-      The Garner family have asked that those who can, look to foster children as Erica was once fostered.

-      Educate yourself. Reading ‘What does it mean to be white?’ by Robin Diangelo and ‘Why I am no longer talking to white people about race’ by Renni Eddo Lodge would be good places to start.

-      Donate money to a charity that does anti-racist work.

-      Support and increase the visibility of black women by reading their books and poetry, buying their art, celebrating their achievements and sharing their history by following @citeblackwomen on twitter and use the hashtag #CiteBlackWomen

For Erica and her family, the Black Lives Matter movement and a just world, we pray. Amen.