Exile As Opportunity: The Fringes and Hidden Corners of the Church 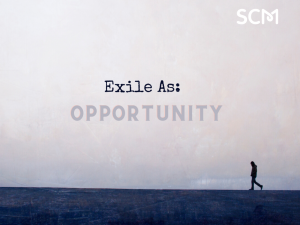 As lockdown eases towards another ‘new normal’, I want to share some brief reflections on what the ‘exile of lockdown’ has been like for people from my own denomination (Roman Catholicism), as well as how this ‘shared’ exile we are in as the Church compares with what might be termed ‘isolated’ exile within the wider Christian community. Put another way: how the exile of Roman Catholics worldwide from attending weekly Mass during this pandemic has made me reflect on the exile from church and/or faith that so many individuals go through on a weekly basis, that often goes unnoticed.

For months we have found ourselves cast out from our physical worship place, unable to gather for large services or private prayer. This led to rapid movements within churches to address this pressing issue. On 27th March, shortly after the UK lockdown began, Pope Francis made the extraordinary move of giving an ‘Ubi et Orbi’ proclamation before the Exposition of the Blessed Sacrament of the Eucharist, to an empty St Peter’s Square in Rome. ‘Ubi et Orbi’ (‘To the City and to the World’) speeches are typically given on Christmas Day and Easter Sunday; yet an unprecedented pandemic called for a unique and swift response from the Church. This is not just true of Roman Catholicism: the Christian Church overall was forced to alter its practices and the way in which it worships. With public services not an option for the foreseeable future, Christians everywhere had to rethink ways of practising their faith, creating and sustaining community via online methods, and thinking about what it REALLY means to identify as a Christian in the twenty-first century – and how much public worship defines that.

The pandemic caused a great deal of pain for many Christians over Holy Week in April. Like the disciples hiding in the Upper Room following Jesus’ crucifixion, all we could do was sit in our homes and wait and watch, not knowing our fate or when we could safely go outside again. Yet for many of us, that has actually been the reality for a very long time. There are so many reasons why someone may not be able to attend their denomination’s place of worship regularly, or at all. Illness and the frailty that accompanies it are the most obvious factors, yet there are so many others.

As a Roman Catholic whose psychosis is triggered by Christian buildings and worship, I can’t help but wonder: where was the rush in UK churches prior to lockdown, to regularly film and broadcast services so that I might feel part of my church’s community? While spirituality is not confined to church attendance (or at least, should not be!), the Sunday obligation is a core part of Roman Catholic culture. Although I have unofficial dispensation from this obligation, I have struggled to find and maintain a Roman Catholic identity and a voice within the Church, as someone who cannot partake in its main structural practices.

I would go so far as to argue that for those of us who were in exile from church before lockdown, are now out of our isolated exile. Whilst many others struggle to adjust to online Mass and feel the pain of lockdown, the accessibility that modern technology affords - once it is thought of and is employed – is a chance for renewed Christian life for those who existed within the fringes and hidden corners of the church. It is an exciting opportunity for the church at large – I only hope they will take it.

Written by Shanika Ranasinghe. Shanika is a Roman Catholic Music PhD student at Royal Holloway, University of London, and is a member of SCM.