Faith and the General Election (Revisited) 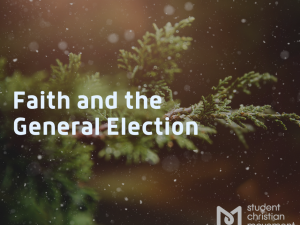 Voting in the Kingdom of God

I love Britain. I think it’s a wonderful country to live in, and I’m grateful to say that this beautiful island is my home.  However, when I look around, I can scarcely claim that it looks like the Kingdom of God.  For a start, it’s fantastically unequal.  The top 1% own 13% of the wealth whilst the bottom 20% own just 8% (1) (indeed, 4.5 million children in the UK (a third!) are living in poverty(2)).  This same economy each year pumps millions of tons of carbon into the atmosphere destroying God’s creation and inflicting immense suffering on the world’s poorest who did the least to cause this climate crisis.  Our society celebrates the wealthy whilst jeering at and punishing the poor and marginalised.  This has to change.  If Jesus returned right now, we would be in trouble.  We all know what he said about wealth and power.  We all know who comes first and last in the eyes of God.

The Kingdom of God is not some esoteric intellectual exercise.  Jesus’ ministry was God’s revelation of how he desires his creation to be ordered.  Jesus did not merely talk in banal platitudes about lifting up the lowly but really fed the hungry, really healed the sick and really defended the oppressed.  In our democracy, we have the ability and responsibility to shape our society and economy to be more like the Kingdom Jesus described and exemplified.

I think it’s unlikely that humans will ever actually manage to realise the Kingdom of God on earth, but I don’t think Christians have the choice not to try.  ‘Thy will be done, thy kingdom come’ is a commandment, not a wish.  These lines that Jesus taught us must be prayed not only with our hearts but also with our hands.  Let us prayerfully vote to build the Kingdom of God, a Kingdom that is good news for all of God’s people and good news for all of God’s creation.

1 The Equality Trust. (2019). The Scale of Inequality in the UK. Available at: https://www.equalitytrust.org.uk/scale-economic-inequality-uk (Accessed: 5 December, 2019).

The stranger who resides with you shall be to you as the native among you, and you shall love him as yourself, for you were aliens in the land of Egypt.

Being a 'stranger' in the UK has been an odd experience since I arrived four years ago. On the personal level I've almost always felt welcome, but as soon as I look at the bigger picture, the national discourse, the media debates, things are more troublesome. In the last years people like me - EU immigrants - have been the topic of many political ads, dinner conversations, newspaper headlines and parliamentary debates.

Supposedly, non-British EU citizens in the UK are simultaneously overburdening the NHS, and propping it up as nurses and doctors. Similarly, we are accused of taking people’s jobs while also draining the UK welfare system. Finally, we are both bringing crime to Britain, and saving the country from it as magical narwhal tusk-wielding heroes. We end up being painted either as heroes or villains, but always as abstracts to be talked about rather than people to be talked with. In the meantime, we've been living in constant uncertainty. How do you visit family in mainland Europe when one of the Brexit deadlines is right around the corner and you aren't certain you'll be able to return to the UK? How do you look for a job when you aren't sure you'll still have the right to work by the time the first day of work rolls around? How do you get yourself to fill in all the paperwork to apply for a status which gives you less rights than you currently have? These and other questions have remained without adequate answers for years. At the same time we’re used as campaign fodder for referendum and general election campaigning. All of these votes have had and will have a tremendous impact on our lives while we have no right to vote in them.

So here I am, a few days away from yet another general election that I don't have a vote in, feeling more a stranger than ever. I feel nervous and helpless, and I keep alternating between checking the latest polls and predictions, and wanting to look away from it all. So, do me a favour, and in the few remaining days before the election, keep the 'strangers' who reside with you in your mind. The EU immigrants who have been in limbo for over three years, the Windrush generation and other non-EU immigrants who have felt the full, merciless force of the hostile environment for much longer, and all the Brits who have been made to feel like strangers because of the colour of their skin, their religion, or the birth place of their parents.

Written by Juliane Borchert. Juliane is a physics PhD student at the University of Oxford.

Tags:
#Politics
< Back to all blogs