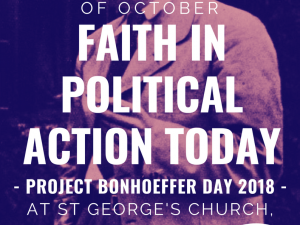 Since 2013, Project Bonhoeffer has held a series of day events bringing together its friends and supporters from right across the country.  These Dietrich Bonhoeffer (DB) Days, held in Coventry, Birmingham, London and Leeds, have been valued opportunities to think about Dietrich Bonhoeffer’s contribution to our understanding of discipleship today. They have also enabled participants to learn about the work done through the Student Christian Movement’s Faith in Action programme, which PB supports financially along with funding a full-time post for a member of staff whose tasks include making students more aware of Bonhoeffer’s life and thought.

The 2018 DB Day held in October in Leeds had as its title ‘Faith in Political Action Today’ when our keynote speaker was Dr Jennifer McBride [Chicago], current president of the International Bonhoeffer Society.  It attracted our largest DB Day gathering so far, made up of people of different ethnicities, age-groups and backgrounds – academic and otherwise – including present and past members of SCM and sister organisations and networks such as the Iona Community, Justice and Peace, and the Progressive Christian Network.

The highlight of the day was Jennifer McBride’s speech. She began it by focusing on what Bonhoeffer had said in his Cost of Discipleship [1937] about what it means to follow Jesus.  She summed it up simply: Christians must become disciples of, not simply believers in, Jesus. Christians, Bonhoeffer had insisted, cannot claim faith in Christ while failing to respond to Jesus’s calls for hands-on, here-and-now action from those who would truly follow him. His calls are consistent, clear, practical and unambivalent: to feed the hungry, care for the sick, welcome and give hospitality to strangers, visit those in prison, love one’s enemies, forgive others, renounce wealth, practice nonviolence, refuse to resist evil with evil, not to judge others, loving mercy and doing restorative justice.

In Bonhoeffer’s view, Jesus did not call his followers to subscribe to an abstract set of religious ideas or moral principles. Nor did he see Jesus as setting up any kind of system or institution, social, political or religious. Who is this Jesus?  - Bonhoeffer asked himself. His own answer was that Jesus is a person who cannot be ignored since he is the one who brings new hope to the world, transcending our human systems, disrupting our previous political, social and religious ideas and calling his followers to carry out his commands amid all the messiness and uncertainty of lived reality – the world of society and politics. By his own life, Bonhoeffer showed us what it can mean to be a follower of Jesus in such a world, caring for others who society had rejected, even giving his own life to save theirs. So he would ask us:

Who are the strangers in our midst who we have overlooked, ignored or made unwelcome?

Who are the people whom we as a society, as a community-group or congregation – have neglected, even rejected and deemed enemies?

How do we, those of us who, belonging together in a church or community-group, obey Jesus’s commands to welcome strangers and enemies, be they real or perceived?

Dr McBride went on to describe new ways of serving others and of being church to the people around them that are being pioneered, embodying Bonhoeffer’s ideas and initiatives at the time of the Confessing Church in the 1930s. She described the development in some city churches in the U.S. of houses of hospitality through which congregations have become discipleship communities - with ‘open doors’ fit and ready to engage in works of mercy as they reach out in loving care to those who society despises, victimises and rejects. By sharing and supporting them in their struggle for justice, such communities have brought a new hope to those who are condemned by society – rightly or wrongly. By combating social evil with mercy and loving care for those who are its victims, they help to heal the wounds of an unjust and uncaring society.

Plans are already on hand for the 2019 DB Day in Leeds on Saturday 26 October. Look out for further details on the Project Bonhoeffer website.

Geoff Driver is a trustee of Project Bonhoeffer, and an SCM Friend.