In Favour of 'Global Majority' 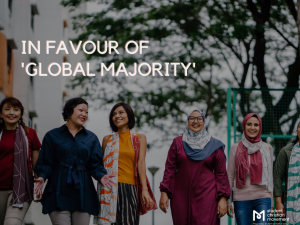 Being from the United States of America, I hadn't heard of the term BAME before I came to the UK. BAME stands for Black, Asian and minority ethnic. I was told that this is was a term which defined me; a term to help identify my experiences for other people. BAME is a term that was designed to give people who aren't White British a seat at the negotiating table, but the next generation has a major issue with the term. We are not just "non-white", or minorities - we are a diverse group of people with individual cultures, experiences and lives. We are global people, and we are a part of the global majority of the earth.

My experience in the U.S. means I'm more likely to use the term PoC, People/Person of Colour, than BAME but this has a different meaning and historical background altogether, and isn't without its own problems. My biological grandmother would always say, “We aren’t more colourful than white people. They turn green, red, pink, purple and sometimes orange, therefore why are we considered coloured?” This stayed with me, and I remembered it every time I was filling out a form and had to identify my ethnicity or colour.

Thankfully, language is always evolving. My Grandparents were called "n******" and "negroes" by most White people. Then, in the late 1980’s, a Christian Pastor by the name of Jesse Jackson started using the term African-American. And now my generation, in the US at least, usually prefer to be called Black Americans. As of June 2020, in response to the Black Lives Matter protests and activists , the letter b is now capitalized for Black in American English to refer to people of the African diaspora. This is to represent a collective experience of the blood, sweat and tears of oppression, and our triumph over adversity.

Distinguished Professor and Christian, Gus John, has now offered an alternative term as he chooses to say "Global Majority" as opposed to BAME. This term, according to Professor John, gives honour and celebrates the fact that many of these ethnicities which we refer to as a "minority" actually make up the majority of populations of the world. It is a way to define us in a positive way. This term, People of Global Majority, or PGM, gives us an understanding and perspective of the global nature of the Church and the Gospel of Jesus.

The terms for people and their ethnicity are evolving all the time, and sometimes we feel late to the party or worried about which is the "correct" term to use. Progressives like myself want to make people feel not just included but that they truly belong, and we can do this with how we speak. Remaining actively conscious of the language we use is a powerful act of allyship. We can all honour and respect one another by using language that does the very thing that our faith directs us to do; simply love.

Tags:
Race
BLM
< Back to all blogs