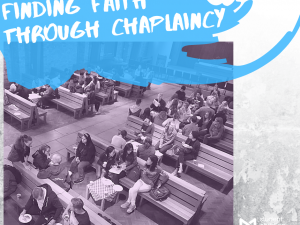 I became a Christian in my penultimate term of university. It was the end of a period in which God was leading me to Him.

I had seen Christianity as a moral way to live, but didn’t believe in Jesus. This gradually changed at university. I met people who were open about their faith and who wanted to share it - some wanted to share it a bit too much, whereas I needed to pursue things at my own rate! On starting at Fitz, I joined the college chapel choir. I enjoyed singing Evensong and appreciated the messages within the sermons, the communal suppers after services, as well as the peace and routine, which was particularly helpful during the most stressful times in term. I also had the opportunity to ask the chaplain and other Christians questions about the Christian faith.

The summer before final year, I was increasingly worried about the future. In January, I felt restless and wanted to try out new things like the Christian Union’s initiative ‘text a toastie’ in which you can text the CU a question and they will deliver you an answer and a toastie to go with it! I soon was invited to the CU missions week called, ‘What are you searching for?’ which really appealed to me.

I went to one talk, then several more, all on John’s Gospel. I was hooked, and interested in what was said about the hope and strength found in Jesus for living life to the full. Before, I hadn’t fully understood how ‘small sins’ could be compared to ‘bigger sins,’ but a friend helpfully explained the verticality of sin and how all fall short of God, who is without sin. This all made perfect sense to me.

During that time I felt a mix of emotions, including joy and repentance. My questions weren’t about ‘big Christian topics’, but more on living as a Christian. The words of the music I was singing in chapel suddenly really meant something.  It felt like God was telling me to walk with Him. Thoughts crowded my head about the impact of such a decision. One Sunday, I was asked to take up the chapel offering, and had a real sense of peace that I hadn’t experienced for a while. I also remembered I’d woken up in January in the middle of the night, saying ‘I believe in Jesus’, though dismissed it at the time.  On Monday the 9th February 2015 I felt ready to say, instead of ‘I’m  becoming a Christian, that ‘I am a Christian’ and so prayed my first prayer with two friends, listened to hymns and committed my life to God.

I was lucky to have caring Christians around me for the last months of my degree, during which I was baptised at Fitz Chapel within the community where my faith had developed.  It was a special service and I was able to pick my favourite music. Since then, the journey of faith has not been easy but knowing Jesus gives me a hopeful courage, which I didn’t hold before.  Although it’s still difficult to, I am learning to lean on God and trust in Him as I journey towards what He’s prepared for me in life.

Written by Annika Matthews. Annika is a 24 year old Christian, currently participating on the Church of England Ministry Experience Scheme in Manchester, experiencing parish life. After her time studying Classics in Cambridge, she spent a year volunteering out in Romania, then completed a MA at KCL in Classical art and Archaeology. She has also spent time volunteering at a school chaplaincy charity in Ipswich. She is a General Synod Rep from the Church of England Youth Council as well as the C of E Lay Rep on the Churches Together Enabling Group.