Five Days in Palermo: Uniting with SCMs across Europe. 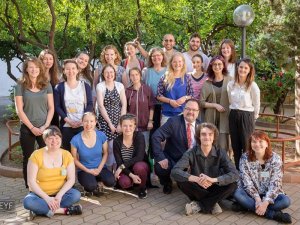 Last week, Rach and I embarked on a trip to Palermo, the capital city of the island of Sicily. Not for a holiday, but to attend a meeting of European SCMs organised by the World Student Christian Federation (Europe), which was providing training on how to recognise and combat hate speech, particularly in the digital sphere. There were 22 delegates representing 13 different nations across Europe, spanning from Norway to Armenia. Also, there was a Belgian trainer and an Argentinian photographer. We were a very diverse bunch!

The purpose of the week was to equip us to be able to think critically about how the media works. How are stereotypes employed? Do these stereotypes enforce or negate prejudices? How do producers of various media influence their audiences? How are gender and sex represented? What is the progression from stereotypes and prejudices to hate speech and, ultimately, hate crime? There was a range of illustrations from our own countries, from anti-LGBTQI+ rhetoric in Lithuania to misinformation around the Eighth Amendment referendum in Ireland, and the ongoing campaign in certain papers about Brexit in the UK.

In addition to some pretty full-on training, we were able to socialise with fellow delegates and find out what their SCMs are up to. For example, our Dutch counterparts run a student bar in Maastricht, which is used for group dinners, discussion nights and bible studies. The ESG in Germany is a vibrant organisation, with student pastors in most university towns and cities across the country.

The meeting was held at a Centro Diaconale La Noce, a Christian Institute that runs community initiatives in the Noce district of Palermo. This district is quite run down and away from the main touristy areas, giving an insight into the ‘real’ city. The mafia is still very active in Sicily but, as local Pastor Peter explained, the realities of organised crime are very different to the Hollywood notions we have. The organised crime in Palermo means that rubbish doesn’t get collected regularly because there are numerous staff for one post and therefore no money for petrol for the rubbish trucks. It might seem a bit banal but is a very real problem for Palermitani (residents of Palermo).

Pastor Peter also explained that as Italy is one of the only countries taking proactive action on the huge waves of refugees and migrants trying to escape horrors in North and Sub-Saharan Africa, Sicily has a high number of displaced peoples. Unfortunately, some are prime targets for the criminal underworld, and drug smuggling, forced prostitution and human trafficking are realities for many trying to find a safer life.

We were also lucky to have a visit from Alberto and Marta from Mediterranean Hope, and organisation working directly with refugees and migrants, as well as lobbying Governments to take action. They have recently set up the ‘Humanitarian Corridor’, which resettles people directly from Lebanon, and are hoping other countries will replicate the scheme. Sharing stories and mobile phone footage from the people they’ve worked with, the harsh realities of people smuggling was incredibly sobering and moving.

As we settle back into the regular rhythms of work this week, I am grateful for the opportunity I was given to meet so many like-minded people and to experience a truly special event. I hope that I can apply what I learned to my work and help, in some small way, in the fight against hate speech.