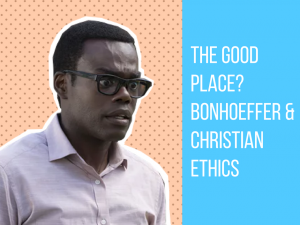 Along with seemingly everyone with a Netflix account, I’ve recently been binge-watching NBC's hit show The Good Place. It centres around a woman, Eleanor, who finds herself in heaven, but *spoilers!* quickly discovers she’s not meant to be there. She decides she has to find a way of becoming a better person, ASAP, or she’ll be found out and removed to The Bad Place (gasp!). For help she turns to her assigned soulmate, Chidi Anagonye, who during his life on Earth was an ethics professor – the perfect man for the job!

Or is he? Chidi knows all there is to know about ethics, all the work of the great philosophers from Aristotle to Kierkegaard, and has written extensively on ethical theory and moral philosophy. And yet… rather than giving Eleanor clear and confident advice on the best way to act, he is crippled with indecision at every turn. Rather than his ethical theories being a helpful tool in his endeavour to live a morally flawless life, they have become a guilt-inducing burden he wrestles with at every turn.

As Christians, many people see us like Chidi, striving helplessly to be perfect moral beings and clinging to our righteousness as a badge of honour. In the worst cases, we’re even seen as judgemental hypocrites. But Bonhoeffer rejected this idea. His extensive letter from prison about Christian ethics centred around the idea that in fact, being a disciple of Jesus isn’t just a separate aim from living an ethical life, but they are mutually exclusive paths. For him, trying to define a Christian ethics was a paradoxical idea. Rather, as Christians, we are freed from the turmoil of ethical law-keeping to live a life dedicated to Christ.

Bonhoeffer lived this out very clearly in his own life. Under Nazi rule, he was forced into a situation where no decision he could make was ethical or morally permissible, and yet he found himself called through his relationship with Christ to act anyway, and to become part of the plot to kill Adolf Hitler. While this wouldn’t seem ethically permissible under many legalistic systems (I can picture Chidi’s head exploding at the very thought), he saw it as what God was calling him to do, even though it led to his imprisonment, and ultimately to his death.

The good news of the gospels is that we are freed from the old legalistic systems through the grace of the cross. And what are we called to do with this freedom? I believe it’s to live as disciples in the full knowledge that Christ sets us free from having to live up to any ethical demands, free from crippling doubt, shame and guilt – free to create a Good Place around us every day.