The GRA Reform: What is it and Why Does it Matter? 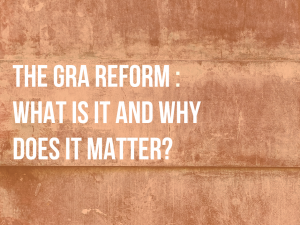 You might have heard the phrases “GRA consultation” or “Gender recognition act” thrown about lately. Here’s what it's all about and why it's important to trans and non-binary people.

The GRA is the Gender Recognition Act 2004. It’s a piece of legislation that allows transgender people to change the gender on their birth certificate from the gender they were assigned at birth to the gender they identify as, and receive a Gender Recognition Certificate (GRC). The GRA is now very outdated and unsuitable (for numerous reasons) and is currently going through public consultation before changes are made. We’re going to highlight briefly how the current system works, what is wrong with it, what trans campaigners are hoping for after this consultation, and how students can help.

The current process is long and complicated. It requires a person to provide evidence that they have lived in their chosen gender for over two years (which is difficult to prove and dangerous for a lot of people to do). It requires them to have received, and processed that they've had, medical intervention as part of their transition (including a diagnosis of gender dysphoria). It requires them to go in front of a panel (who decide whether or not to award a GRC). And it requires money (which alongside any legal fees can be too much of an expense for many trans people). Trans people are pretty much forced to display their medical history and genitalia in front of the government, and to pay for the privilege of doing so. Why should trans people have to go through this when the rest of us don’t?!

Medical diagnosis and treatment is currently very much at the forefront of being able to get a GRC in the UK, and that's something trans campaigners are very keen to move away from. Being transgender is no longer really considered a “medical issue”. Some trans people (particularly non-binary people) choose not to use medical intervention in their transition, if they choose to physically transition at all. In light of this, one of the changes proposed to the GRA includes removing the need for a medical diagnosis or treatment and the need to declare this when applying. Other called for changes include reducing or even removing the length of time a person must live in their chosen gender before being eligible, reducing or removing the fee required to get a GRC, the inclusion of non-binary gender markers (asides from just male and female) and reducing the age at which people can apply for a GRC from 18 to 16.

The main change that many people are calling for is allowing self-identification. This is where the person in question self-declares their own change in gender rather than having to go in front of a panel to decide this through medical evidence, and removes the need for a medical diagnosis. The self-identification process is already used in several countries such as Ireland, Portugal and Norway with great success.

The GRA consultation is open to the public till October 19th. If you wish to submit your views on this topic (which can be done anonymously), you can do so here (scroll right to the bottom of the page to respond online) :

NUS (national Union of students) and LGBT+ charity Stonewall have both written guides to help you fill in the consultation, which can be found here:

https://www.stonewall.org.uk/gender-recognition-act (you can respond to the consultation directly through the Stonewall website)

It's important to add that although SCM are not submitting to the consultation on behalf of the National Movement, we do support all trans and non-binary members and students, and believe they are as important and as welcome as anyone else.

Written by Emilia De Luca, an SCM Trustee and Access and Inclusion Rep for General Council.