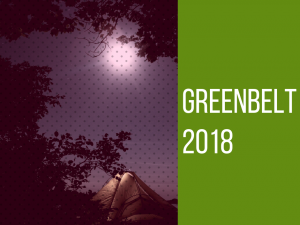 Previous to volunteering with SCM at Greenbelt 2018 I had only been to Greenbelt once before, four years ago with some friends from university. While I had enjoyed the festival itself, I was freezing and hardly slept which made me grumpy! This time I arrived with a massive blanket, four-season sleeping bag and lots of layers. Amazingly, I got a good amount of sleep each night and decided I might actually like camping after years of hating it!

I had wanted to go back to Greenbelt because of the community atmosphere and the thought-provoking sessions. It was great to meet and work with other members of SCM both on the stall and at the student meet ups at the Jesus Arms. I had previously met about half of the SCM team and over the festival I enjoyed getting to know everyone better. The history of SCM was really impressed on me when meeting previous members of the General Council, and people whose parents had met through SCM. I was hoping that while on the stall I would meet at least one Lancaster student and I did!

One of the great things about volunteering with SCM was that I had a lot of free time. An essential part of this for me was spending a couple of hours each day away from everything; as an introvert it takes me a while to process things and at Greenbelt there’s a lot to process! This also meant I was very picky about the sessions I went to.

Greenbelt is great for music and I had been excited for ages that one of my favourite bands – I’m With Her – were going to be performing. This was the first time I’d seen them live and they didn’t disappoint. After hearing Harry and Chris being raved about by many people (particularly my fellow volunteers) I decided to go and see them. Definitely a good choice!

I have great interest in ecological spirituality and really enjoyed the sessions I went to at the Forest Church site – the Grove. These were led by people from different communities, a female bishop and members of Forest Churches on topics such as poetry and mysticism. I also attended talks about climate change, prompted by a wonderful conversation with Peterson Toscano and a Franciscan monk at the SCM stall!

It was interesting to see how Greenbelt was trying to be more inclusive – from the communion service centring around the experiences of those who came to Britain on the Windrush, to ensuring that an equal number of men and women asked questions at some sessions (I still have mixed opinions on this one in particular). However, the reduction in plastic use seemed to be very positive. I love the atmosphere and community that Greenbelt generate. I can understand why some people have been going for decades and I look forward to attending again soon.

Written by Helena, an SCM Member and leader of SCM Lancaster.

Tags:
Greenbelt
< Back to all blogs