He Knows My Name 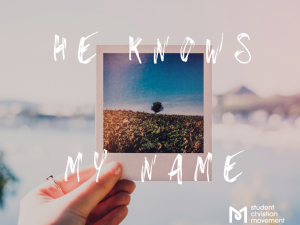 I often look back at the first time I walked into the SCM meeting at Lancaster University, and I remember thinking, “Gosh, students actually do that?!”.

I come from a country that does not encourage its youth to be involved in anything overly political, to protest, petition against or fight for something (unless you want to get kicked out of university!). Sure, we’d have conversations, but we were often discouraged to act on or talk openly about issues which meant something to us. So SCM was a breath of fresh air. I was consistently inspired by my fellow members who would campaign, stand for something, and live by the principals and values they believe will transform the community and the world around us. All this while being grounded and rooted in the Word and in Faith.

Being a Christian in Malaysia is tricky – I grew up in a majority Muslim state where Christianity wasn’t entirely welcomed. I was also an easy target for racism and discrimination because I am an Indian. If you asked me 2 years ago, I would have said that ‘Identity’ brought me more trouble than good. I think that’s because this notion of ‘Identity’ can sometimes place us in boxes; compartments to make it easier for others to know us, to like or dislike us, to be our friend or to make our lives a living hell.

The day before I left Malaysia in 2018 (having a dramatic cry on the flight because I thought I would never be returning to it), I really questioned this idea of ‘Identity’. Not so much of the religious or ethnicity part which I had been stuck on for years, but more of purpose; of finding something to live for so that when someone asked, I could say, “This is me and this is what I believe in”.

…open up my eyes to the things unseen […] break my heart for what breaks yours,

Everything I am for your kingdom’s cause.

For the longest time, this has been my prayer. But I didn’t know that I needed to leave my homeland to completely embrace what this prayer asks for. Being involved in SCM taught me that when we are ready to open our hearts and minds to God, He takes us on a revolutionary journey of renewal and rebuilding; a metamorphosis where we no longer see ourselves as just an individual, but as His children, serving in the many things He has called us to do. That it isn’t just about doing things, but about partnering with Him and those around us – Christian and/or of other faiths – to stand against injustice, fight for what is right, to pray and intercede, to dream, to hope, to rest secure, to take a stand even in the face of discrimination and persecution; to face the Goliaths of the world with Faith, Hope and Love.

As I write this, I am grateful for the way SCM has helped form and shape my identity and this new-found love and passion for a country I didn’t think I could call home. Even as I write this, I am grieving for my country - the loss of democracy and the rights of people who have fought so long for change; for Christian leaders who have finally been given a platform in government only to have it robbed overnight. But if there’s any consolation to all this, it is the security we have in Christ and the hope that it brings even to the disheartened and weary soul.

Today, I stand as a proud Christian & Malaysian, because despite what my country may regard me as, I am convinced that God knows me by name; He calls me his own. And understanding these Truths has made me realise that we are called to bring this Good News to those around us, in whichever way that may be.

The Spirit of the Lord is on [us], because he has anointed [us] to proclaim good news to the poor. He has sent [us] to proclaim freedom for the prisoners and recovery of sight for the blind, to set the oppressed free

Written by Miriam Samueal. Miriam was a member of Lancaster SCM whilst studying in the UK. Miriam considers herself a long-distance member of SCM. She currently works in a church in Penang, Malaysia, and is a PhD student at a local university. In between, she finds herself thinking about God, Social Justice and the best place for jam doughnuts.

If you'd like to join or start an SCM group at your uni, get in touch or find out more here.