The Healing Powers of Anointing of the Sick: A Roman Catholic Perspective 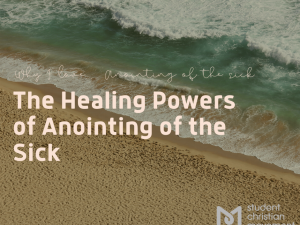 Anointing of the Sick is probably the least heard-of and most-misunderstood sacrament of the seven practiced by the Roman Catholic Church. Sacraments are powerful ‘outward’ symbols of God’s inner working and grace. Anointing of the Sick is no different in that, though it is a physical, visible and tangible sacrament, the effect it has on the person receiving it is often largely interior and unseen by others.

Anointing of the Sick finds its Scriptural basis in the Gospel according to Mark, as well as the Letter of James. In Mark: 6, Jesus instructs His disciples on how to conduct their ministry. Verses 12-13 of that chapter tell us: “12So they set off to preach repentance; 13and they cast out many devils, and anointed many sick people with oil and cured them”. Meanwhile, James 5:14-15 states, "If one of you is ill, he should send for the elders of the church, and they must anoint him with oil in the name of the Lord and pray over him. The prayer of faith will save the sick man and the Lord will raise him up again; and if he has committed any sins, he will be forgiven”. (Excerpts taken from the CTS New Catholic Bible.)

The Catechism of the Catholic Church (commonly abbreviated to CCC) notes that anointing practices have been in place “from ancient times” (CCC 1512), so it is a long-standing tradition. Many Roman Catholics think of it as a sacrament only for those on their deathbed. This is indeed one of its more common uses, as anointing is part of the Viaticum – the term given to the sacraments of Reconciliation, Anointing of the Sick and the Eucharist when administered to the dying. However, the Catechism is clear that is can be given to “anyone of the faithful who begins to be in danger of death from sickness or old age” (CCC 1514).

Anointing is done following prayers and laying on of hands by a priest or bishop. Blessed oils are put on the forehead and palms of the person receiving the sacrament, in the shape of a cross. Anointing can be done in public (as part of a Mass or healing service), or in private. It often forms part of RC parish celebrations of World Day of the Sick, which falls every 11th February (the feast of Our Lady of Lourdes, to whom miraculous healings at the pilgrimage site have been attributed).

The timing of World Day of the Sick in the RC calendar has been fortuitous for me personally, in terms of receiving Anointing of the Sick during services on this day. As someone with long-standing and occasionally life-threatening mental health issues which tend to flare up massively in the run-up to and during Lent, I have been anointed on a handful of occasions. This has sometimes been part of a public healing service, but often it has been in private with just the priest present.

Anointing of the Sick is a truly important and powerful sacrament. Roman Catholic family and friends hoped that I might be “healed” of my mental health problems via this sacrament, or by going on pilgrimages. The reality has been far more complex and less tangible than people would like. Personally, while I have no doubt that this sacrament has the power to physically heal or rid people of poor mental health, I have not experienced healing of the illness itself. Instead it has been a gradual transformation of my attitude to health – and thus, my life. I had previously seen myself as a burden and felt that every Lent was doomed to be a horrific psychiatric mess. I could not see my place in the world, and felt I had nothing to offer anyone. While such thoughts do still come from time to time, anointing brings a sense of safety/protection and a chance to unite my suffering with the crucified Christ. The inner stillness it gives provides a space in which to recognise the power of redemptive suffering and to feel the love that the RC Church has for me. Truly, it is a gift from God.

All May, None Must, Some Should: a Methodist View of Confession