Hi, my name is Alana! 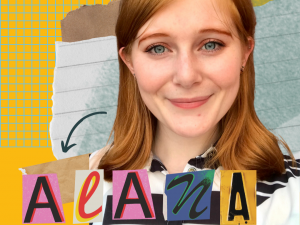 Hi, my name is Alana!

I graduated this July from the University of Birmingham with a bachelor’s degree in Theology and Religion. Studying a range of topics from biblical scholarship to anthropology, Christianity was the primary focus of my higher education due to its vast history, archaeological presence and complicated moral footprint.

Ever since I was a child I loved to write! During my GCSEs and Alevels I thrived on the experience of getting to write lengthy essays and I excitedly awaited the day I would finally complete the greatest essay of all: dissertation. During my second year at university, it didn’t take me long to decide what I should write about. Certainly, the only thing that had ever interested me as much as writing was cinema! Film, for me, is not a form of escapism but the encapsulation of perspective. Through film you can access stories you yourself have not experienced and learn to understand that truth comes in many different forms for different people living different lives. Cinema gives us an opportunity to witness this human complexity, this subjectivity, more directly.

A combination of religion, film and 11,902 words of in-depth excitable analysis later, I had finished my dissertation:

With focus on themes of self-sacrificial suffering in the films Winter Light (1963) and Pulp Fiction (1994), I will determine if cinema is an adequate vehicle for change.

For me, a combination of these three things (humans, religion and film) perfectly represents how faith can be put into action. Whether by a director creating their filmic masterpiece in honour of their God or gods, or an unsuspecting audience member touched to the core by the powerful imagery and script before them, both religious and seemingly secular films can have a great impact on how someone feels. As filmmaker and activist, Obaid-Chinoy, explains, “film can change the way people perceive issues” by presenting them with “competing”, yet equally valid, “worldviews” (TED, 2019).

Though my work will unlikely be as impressive as either of the films I wrote about in my dissertation, I look forward this year to creating resources that will hopefully inspire at least one student to think more deeply about their beliefs. A person cannot take action if they do not know who they are or what they value most in this world. I hope that through blogging, workshops and more, I can support students so that they feel empowered by their faith and guided by their own complicated perspectives in order to help others.

Because life is not a film, we are not actors, and the expression of real suffering is not akin to an Oscar-winning performance.