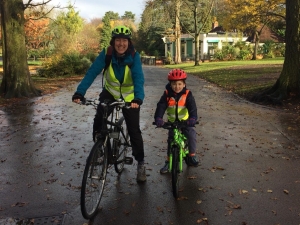 Have you ever managed to keep a New Year’s resolution? I did, once, and it massively backfired. I gave up chocolate from Christmas until Easter, and then ate loads of chocolate in one day and had the worst flare up of eczema I’d had for a long time. I learnt my lesson and now eat chocolate in small (ish) quantities all the time.

I don’t have a lot of will power when it comes to changing habits. I find it easier to go for all or nothing. I can completely give up chocolate but cutting down just doesn’t work. So, going with that theme I’ve gone for a big challenge this year, nothing half hearted. Throughout January I’m going to do a triathlon, well my version of one anyway. A bit of context; I’m a terrible swimmer, I only managed my green badge in primary school which I think was about two widths of a small pool. I haven’t run anywhere apart from for trains and buses or chasing a toddler for about 15 years. I cycle to work about twice a week on a good week if the sun is shining – which takes about 25 minutes each way. The plan is that my triathlon efforts add up to 130, so breaking it down that’s 1.3 miles swimming, 13 miles running and 115.7 miles of cycling – which in cold dark January will certainly be a challenge!

Why am I doing this I hear you ask. I’ve been asking myself the same question! I’ve worked for SCM for nine and a half years now and I’ve seen the impact of our work not just on the lives of individual students, but also on the life of the church. In the time that I’ve worked for SCM the landscape of student work, and indeed the churches has entirely changed. SCM’s gentle pot stirring has contributed to many of the national churches renewing their vision for student ministry, HE chaplaincy is now better understood, and, thanks to initiatives like SCM’s Student Ministry Forums, churches, student workers and chaplains are starting to work together to support students, rather than in their own silos.  On the whole the churches attitude to inclusion, particularly of LGBTQIA+ people is also, thankfully, changing, but sadly there is still more to do.  We recently had a young person get in touch with SCM, lets call them Kit, who was about to start university and was worried about finding a church where they would be accepted. That they even need to think about it is shocking to me, but I’m pleased that SCM was able to help and support them.

So I’m doing SCM’s 130 Challenge to help SCM support more students like Kit by having Regional Development Workers covering the whole of Britain. However, I need your help. As I said already, I’m not the best at sticking at things. But if, lets say, I had 100 people sponsoring me I really wouldn’t have any choice but to stick at it! To reward you for your support you will have the joy of occasional photographic evidence of me cycling through the rain (or snow?!).  Perhaps not of me swimming – its tricky to keep the camera dry.

If you feel moved to support my valiant efforts (go on – you know you want to!) then why not head over to my sponsorship page RIGHT NOW. It would mean a lot to me. Thank you.

Finally, if you have ideas for a great New Year’s resolution, why not turn it into a 130 challenge? It might help you stick to your resolution and raise money for a very worthy cause at the same time!

Post-script:  I just looked up how far 1.3 miles of swimming is (bear in mind I haven’t swum anywhere for a few years) and its 83.2 lengths of a 25m pool. I’ve never swum that far!