The Hospitality of Chaplaincy 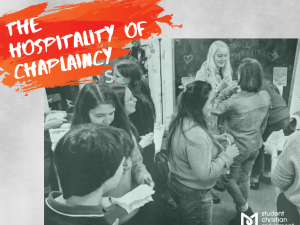 One of the first things I noticed about university chaplaincy at the beginning of my first year was that the Sunday morning services started half an hour later than the Sunday morning services at my hometown church. This realisation amused me: that the chaplaincy took the stereotypical laziness of students into account when planning its services. It wasn’t until term two of first year that I discovered that services of Morning Prayer during the week began at 8:30am!

Chaplaincy at Exeter has gone through a lot of changes since I started university in September 2014. With the Anglican presence spread over two campuses, each with their own chapels, the chaplaincy as I have interacted with it has always been dynamic. Different kinds of services happen at each campus - which are only a mile or so apart from each other - so oscillating between the two was never very difficult. However, the constant that has typified my experience of university chaplaincy is hospitality.

Before I came to university, my experience of church hospitality was tea and biscuits after the Sunday morning service. My hometown church is a family church with a congregation of over 200 which usually means any post-service conversation is little more than small talk. It did not surprise me that the university chaplaincy offered tea and cake after Sunday morning services. The difference was that most of the people there were my own age and most of them were students: there was a commonality between us which made for a more accessible environment than what I had had before.

In my third year I moved from primarily attending one of the chapels to primarily attending the chapel on the other campus. This other chapel had more of a focus on discussion over food, so theology and hospitality happened at the same time. Not only would we eat together, which was a great environment for making friends, but we were encouraged to share our theological thoughts with one another. This kind of discussion-based church lends itself well to a university chaplaincy context, where students spend much of their time while in their university town considering issues and problems and discussing opinions and points of view.

As the years went by and wider changes were made in the chaplaincy, so too were changes made in the hospitality aspect of the chaplaincy. In the last couple of years, the chaplaincy has begun a café on Fridays, with free tea and coffee. All of this has helped to bring people together and foster a community.

That community aspect is why the hospitality of the Exeter chaplaincy has had such a lasting impression on me. I have made many friends through the chaplaincy – friendships encouraged and cultivated by discussion over tea and cake, dinner, or lunch. I vary rarely go to weekday services starting at 8:30am, but I will always stay for a chat after a Sunday service. There’s free food and drink and wonderful company. It has been a welcome part of my university experience.

Written by Ellen Lesser, an SCM member studying Theology and Religion at University of Exeter.