How My Faith Changed at University: Finding a Community of Faith and Action 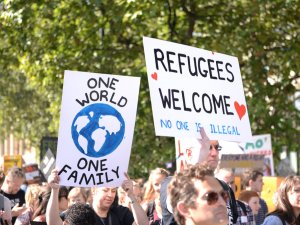 Before I started University I didn’t have any Christian friends. I was the youngest in my church by about 20 years- the youth groups had died out long before I got there. Although I never doubted my faith, by the time I finished school I was finding more use from my daily Bible readings than going to church. These readings had instilled in me the belief that my faith demands action, demands that I try to fight injustice.

When I started at the University of Sheffield, I googled my local church and started going there. Again, I was the youngest by about 20 years, and although I started meeting with an older leader for Bible study, I certainly felt a loneliness in my faith. I tried going to some of the bigger Christian societies but felt uncomfortable- I wanted to be using my faith to help change society and didn’t feel these societies spoke to me. Eventually I stopped going to church altogether and again retreated into my Bible readings.

But I did feel I was living out my faith in my social justice actions. I joined the Amnesty International group, becoming president of it in my 3rd year, and I began volunteering at charities that helped asylum seekers and set up a student group that helped establish scholarships for asylum seekers at the university. Yet I still wanted to find people who shared my faith and my activism.

In my third year at University I met my partner and she took me to SCM. Finally, a group that put religion into practice! I became a regular, and started to go to the Multifaith Chaplaincy more, where SCM was held. This was a great space to meet people from diverse backgrounds, and with my new friends from SCM- and the new church they introduced me to- I found people who were as comfortable discussing the Bible as they were demonstrating against tax avoidance.

I had never really had a community before, a group where I could discuss my ideas, beliefs and views as to how the Bible can be a basis to action. Now I am embedded in one. I was baptised in my old church and confirmed in my new one over a week in Easter. I became president of my SCM group and led some church services. Now I am the Chaplaincy Assistant at the Multifaith Chaplaincy, listening to people's ideas, views and beliefs, and most importantly, helping others find a community.

Nick is a chaplaincy assistant at the University of Sheffield and still attends SCM meetings as a graduate.

Tags:
Faith in Action
Deepening Faith
Christianity
Students
< Back to all blogs