How nonviolent communication can build community 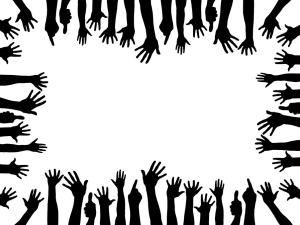 In a blog before Christmas, I touched briefly on the importance of using ‘nonviolent communication’ (NVC) and not shouting abuse at people when we disagree with them. Nonviolent communication methods are needed now more than ever before, because our world is becoming incredibly polarised. It seems to be more and more difficult to understand people on different sides of the political spectrum. We are all speaking to one other from within a political bubble, or an ‘echo chamber’. I've found NVC helpful in life, because I am the type of person who has no trouble at all being angry at injustice, but I have a lot more trouble speaking gently to people with whom I strongly disagree. And yet… however ignorant we think someone’s opinion is, the only way we will bring about transformation, reconciliation and what we might even (in the face of violent opinions like racism and sexism) call repentance (‘changing one’s mind, and rethinking one’s whole outlook’) is through patience, gentleness and respect, as well as an openness to learning.

Don’t get me wrong- there are some very good reasons to be angry at the minute! President Trump is spending each new day of his presidency signing ‘executive orders’ like a dictator, and every time he does so he seems to take away more rights and protections from the most marginalised and vulnerable. The Muslim ban is just the most recent in a long list of horrible authoritarian laws he is trying to enforce. This is harder to take coming from a president who doesn’t even have a proper democratic mandate: he lost the popular vote and is already the most unpopular US president in recent history. These kinds of facts (no ‘alternative facts’ here, please) make us want to lash out at the people who support him and put him in power. Likewise, the rise in hate crimes following the Brexit vote in the UK, and the economic uncertainty that vote has brought to this country has made many people angry.

The internet also makes it harder to have a civil conversation. It’s easier to be rude to people when they’re not in front of you, and that is why the most rabid comments and aggression can be found online. I’m sure we’ve all done the ‘train wreck’ thing of reading the comments thread under an article or facebook post, making our blood pressure rise and wasting precious minutes of our day! It sometimes feels like the world is one big ball of anger: at crap jobs and the perceived threat of immigration on one side, at people who are being racist and sexist on the other. How do we make it stop?

In John’s gospel, Jesus calls us to be ‘one’ with one another (John 17:21), and to ‘love one another’ as he has loved us (John 13.34). Striving for love and unity in a world where there is so much evil and injustice is really hard- it sometimes feels impossible- but Jesus knew that nothing in this world could be transformed into the likeness of God’s kingdom of peace and justice without reconciliation.  We must strive for justice, but we must also work to bring people together- even where there has been real harm, hurt and wrong. In the process of reconciliation, it is important for there to be repentance, but there can be no opportunity for change if we leave no room for it because we write people off and call them names. The times when I have felt God’s presence most powerfully have either been when I’ve been involved in resisting an unjust system in God’s name, or when I’ve seen powerful reconciliation at work. We need both in life: calling out and fighting injustice, and drawing people together.

Next time you’re in an argument, try telling the other person how you feel and what has made you feel that way, rather than throwing accusations. Ask them how they feel and why, e.g. ‘Are you angry because….?’ Finally, try to identify and communicate the need within yourself which is not being met- are you upset because you feel unsafe or angry because you need respect? NVC is an incredibly simple- if challenging- way of making a real difference in our relationships. We are social animals- we need one another, and the way we communicate with one another is crucial to living together as a society. We can make the world a more constructive, peaceful and just place for all if we learn to listen to the needs of other people and ourselves. Nonviolent communication can help us build community in an increasingly fragmented and lonely world.

Ruth can run a workshop on Jesus and Nonviolence, which includes a section on NVC, with your group. Just book here.