Humans Of The Movement - Alex// 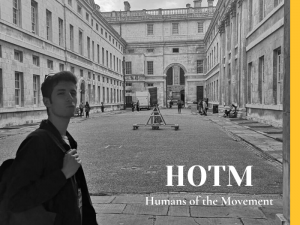 I’m 21 and I come from a village near Southampton. Now I’m training in London as a classical singer. The first queer person I met was at sixth form when I was 16. It took me a painfully long time to come out, but she was the best listener and she helped me start to unbind myself. Church-wise I was a bit isolated when I started uni, but I found a student group at one of the Anglican churches and they hosted an SCM event with some workshops, worship and activism. In that space I guess I saw people liberated from putting on any false show, or from needing to seem like someone they’re not, and it was an honest experience.

My faith is my whole operating system. When I’ve embraced and used myself fully, my faith has grown. I converted back when I was 10, and I guess like a lot of queer people as I got older I closed a lot of myself off as a safety mechanism, rather than facing myself, and those were the times I was isolated and scared. Being LGBTQ+ in the church, it’s interesting that lots of people either don’t think a large part of who you are exists, or they fixate on it and write ‘pastoral letters’ about you as an ‘issue’ to overcome rather than as an inseparable part of the body of Christ. That’s always really fun. As queer Christians, It’s difficult that we’re weirdos in church circles, and that we’re also weirdos in LGBTQ+ circles. I think that’s also the delightful thing, because although it’s sometimes exhausting, just by existing you’re a living witness to the fact these two things can exist in one person and the universe can sustain that phenomenon.

To my younger self I would say that you can be kind and honest. You don’t have to hide yourself in shadow because even when its hurts, the truth really will set us free. Christians believe in this absolutely mad thing: God came to live alongside us and get to know us. You are so worth getting to know.