If Not For That: A Freshers' Reflection 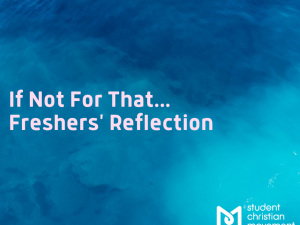 I wish I could do Freshers differently. I would have made more of an effort to find out who my flatmates were beforehand, so I wasn’t ‘the unknown quantity’ in the flat (my words not theirs - they were all very friendly). I wish I’d been a bit bolder about going out and meeting people. I wouldn’t have gone to the cinema one night and wasted £8 on a ticket to ‘Mother!’. Most of all I wish I’d turned the extractor fan on and hadn’t set the fire alarm off on the very first night. All those days discovering the geography of the campus and the wider city have formed into one semi-exhausted blur in my mind. I can’t quite remember which specific occasion of social awkwardness occurred on which day to be honest with you.

What I do remember clearly is the anticipation and anxiety from the weeks leading up to freshers. I associate those days and weeks with the idea of a clean slate yet to be written. There were my new plates yet to be used (mainly for microwave meals and takeaways), my copy of The Norton Anthology of Poetry (Fifth Edition) yet to be scribbled in. The dream of uni that was sold to me through TV and Film and stories of other people’s uni days. Looking back not just on freshers but my whole first year it was hard not to feel underwhelmed. The list of people I knew well was short, I didn’t have any anecdotes about how I narrowly avoided trouble on a night out, and worst of all I’d spent too much time walking from my accommodation to the university when other nicer accommodation was much closer.

What I didn’t realise until second year was how much of a return I would get on small investments from first year. From attending Chaplaincy communion in first year I became involved with the founding of the Inclusive Christian Society (I am now the President). I’ve made friends there and our friendship exists outside of the society, from Doctor Who nights to countryside rambles. I don’t know what I will do now they’re on a year abroad! Thanks to my commitment to a political society I am set to head to Brighton with some friends before term starts properly. But thanks to lonely times in first year my knowledge of Birmingham walks is top notch and I can provide extended analysis on which Birmingham cinema is the best. (Although I still don’t understand my way around The Bullring).

So, while I wish I could do freshers again that’s a big roll of the dice, and I don’t know if my uni life would be the same as it is now. Would I have met Sharon our Chaplain in freshers’ week (who reassured me that there was a liberal Christian space on campus) if I’d been too busy recovering from a hangover that day? Would I have gained confidence from getting involved in party politics if I had made a bunch of random mates in the first week and didn’t seek out people to talk about the Westminster gossip with? Would I know how to enjoy time to myself in Birmingham if I had been a social butterfly 24/7? I’ll never know, but I’m happy with where I am now and that’s what counts. If you are about to enter freshers’, or are in the midst of it right now, take it slow, follow your heart and most importantly you do you because you never know what might come of it.

Written by Josh Harris. Josh is in his final year at the University of Birmingham studying English Literature (with a particular interest in the intersection between religion and literature). He's also President of the Inclusive Christian Society, an SCM affilated group that’s open to everyone on campus.

Tags:
Freshers
< Back to all blogs