An International Ban on Nuclear Weapons? 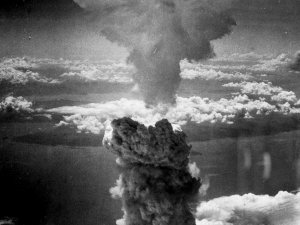 Nuclear weapons have only been deployed in warfare twice- both times by the US on Japan at the end of the Second World War. Hundreds of thousands of people were killed almost immediately, and many more have died since from radiation and cancer related to the attacks. Many women suffered miscarriages, the death of their infant soon after birth, and intellectual disabilities in their children. People who came to Nagasaki and Hiroshima after the explosions in order to help also died of radiation, and in Hiroshima, 90% of all medical staff died. The human cost of nuclear bombs is devastating: according to the ICAN (International Campaign to Abolish Nuclear Weapons) website, ‘[a]ll the dedicated burn beds around the world would be insufficient to care for the survivors of a single nuclear bomb on any city.’ Added to this, the environment could be seriously affected and there could be a worldwide famine if nuclear weapons were used over a sustained period in a war. Nuclear weapons are, in short, criminal and inexcusable and should never, ever be used by any government.

So why do we continue to keep nuclear weapons? Well, actually most of the world doesn’t. Only nine countries own nuclear weapons worldwide: the US, the UK, Russia, China, France, India, Pakistan, Israel and North Korea. These countries believe that they are doing so in order to ‘deter’ against attacks from other countries. However, taken to its logical conclusion, in the event of an attack, retaliation would only cause further retaliation and cities and even whole countries could be entirely obliterated, with potentially life-on-earth-ending consequences for the environment. Is this really a sensible course of action to consider in the 21st Century?  In the words of the Green Party co-leader Jonathan Bartley: ‘What could be more immoral than considering a first use of nuclear weapons, knowing full well that it would lead to the death of countless civilians? And what could be more illogical that pledging to renew a multi-billion-pound nuclear weapons system that will never be used?’

The treaty to ban nuclear weapons

I was recently at a meeting of the Network of Christian Peace Organisations, where we heard from a representative from Quaker Peace and Social Witness (QPSW) about the Nuclear Ban Treaty Negotiations currently taking place at the UN. It seems the rest of the world (i.e. the countries which don’t own nuclear weapons) is sick of waiting for the nuclear countries to give up their weapons. Treaty negotiations have begun involving 132 countries at the UN headquarters in New York, and the hope is that a treaty will be signed by most of these countries in July 2017. This would be an enormous step, as it would put nuclear weapons on the same level as biological weapons, chemical weapons, landmines and cluster munitions. The idea is that there would be international pressure on the countries with nuclear weapons- both practically (the countries who’ve signed the treaty won’t support the nuclear arms industry in any way, making it harder for the nuclear countries to maintain theirs) and morally (there would be increased stigma attached to the owning of nuclear weapons, in the same way that there is international outrage when chemical weapons are used).

In the words of the ICAN website: ‘As a matter of principle, weapons that are indiscriminate in nature and are intended to cause catastrophic humanitarian harm should be prohibited under international law. The proposed treaty will place nuclear weapons on the same legal footing as other weapons of mass destruction.’ Personally, I would like to see an international ban on nuclear weapons followed by an international ban on drones in warfare: despite the propaganda about drones being accurate, 90% of people killed by US drones in Afghanistan recently were innocent civilians, for example. They are also linked to an increase in terrorism, and so make the world far more dangerous.

I am hoping and praying for a safer and more peaceful world without the threat of nuclear weapons or drones. I believe that this important international ban could be a step in the right direction. If you’re inspired by the international treaty negotiations, follow the latest news and support the campaign here. You can also find out more about the moral problems with drones here.

Ruth is the Faith in Action Project Worker for SCM.