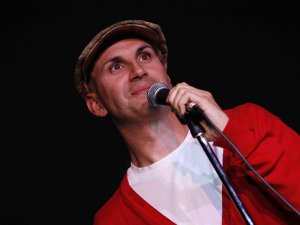 Peterson Toscano is a theatrical performance activist using comedy and storytelling to address social justice concerns. Through his one-person comedies and lively lectures, he has delighted audiences throughout North America, Europe, and Africa as he humorously explores the serious topics of LGBTQ issues, sexism, racism, violence, gender, and climate change. He lives in Pennsylvania with his husband Glen, and blogs at www.petersontoscano.com

You grew up in evangelical environments and are now an active Quaker - what differences do you see between these traditions and what is the most valuable thing you can take from each?

In the evangelical Church I was reminded over and over about how nothing particularly good lived inside of me. I had to be wary of the old man, my flesh, and the devil. My heart was deceitful above all things. Therefore, I needed to distrust myself and instead look outward—to God, as God was presented in the Bible as interpreted by the ministers. Perhaps because of my own insecurities and self-doubts I distrusted myself too much and trusted the ministers too much. This perspective though kept me locked up in the closet unwilling to raise any questions and terrified to come out.

My experience among Quakers has been radically different, but actually not all that different from the teachings of Jesus that I overlooked for years. Quakers stress that each of us has the Light inside of us—that of God in us. Or as Jesus teaches in the Gospel, we have the Holy Spirit to guide us, the Kingdom of God inside of us. As St. Peter instructs, we have a treasure inside a clay vessel. My spiritual focus is now more inward, that the inner teacher Jesus instructs that inside us. Discernment, therefore, has become an important part of my spiritual life, and fortunately I have Friends to help make sure I don’t come up with too many wacky notions.

As a Quaker, you come from a rich tradition of spiritual activism and non-violence. How does this influence your work?

I do comedy, and many people know comedy can be mean and mocking and dehumanising. In fact, that is the easiest type of humour and is in great demand. How better to bring low an opponent than to make fun of them. But this is not an option for me. Perhaps it is in part because of my temperament, but also because I worship in a peace church that actively seeks to be non-violent. Through the Quaker Advices and Queries, I am encouraged to see the humanity even in my opponent, which is very different than just being polite to an enemy. But this has challenged me to seek out new places for humour and storytelling.

For the past two years I have been experimenting with climate comedy. In the USA, for most comics that means making fun of climate change deniers. But I decided I needed to do something different. It is easy to make fun of climate sceptics and it’s not very original. It also does not help my audience grow. If we sit there laughing at someone who denies the reality of climate change, we are saying, we’re smarter and better and therefore really don’t need to do anything more than celebrate our cleverness. Then we inoculate ourselves from any action. So I had to pursue other comic avenues. From the fetishisation of polar bears in the Arctic to the shocking reality that the coffee bean is also an endangered species, I have pushed myself to find new sources of climate comedy that sheds light on the issues.

My husband, Glen Retief, inspires me because of his discipline as an artist who is willing to explore trauma. He published a memoir a few years ago, The Jack Bank—A Memoir of a South African Childhood. It is about growing up white and gay during Apartheid South Africa. The book is a meditation of violence, including the extreme bullying he experienced in a government boarding school. His fearlessness to look at suffering on an individual and a national scale moved and inspired me. Now he is working on a novel about South African history. His commitment to the artistic process, the daily slog of writing along with the willingness to write whole chapters over from scratch serves as a challenging and encouraging model for me with my own art.

If you could give one piece of advice to students, what would you say?

‘Gratitude happens when some kindness exceeds expectations, when it is undeserved. Gratitude is a sort of laughter of the heart that comes about after some surprising kindness.’[1]

Can you tell us about any upcoming projects?

My newest presentation looks at the intersections of faith, justice, LGBTQ issues, climate change, and comedy. It’s called Everything is Connected: An evening of stories, most weird, many true. One of these stories is my retelling of the story of Jesus through the perspective of his placenta who is alive and animated and believes she is Jesus’ twin sister. The Amazing Adventures of the Afterbirth of Jesus will also be released as an illustrated story later this year.

I also have been working on a podcast called Climate Stew. It takes a serious look at climate change but doesn’t try to scare the snot out of you. After 50 episodes, I will be end the series and then begin a new podcast for the group Citizens Climate Lobby. In large part it is to encourage other climate action figures in the important and often difficult work of breaking through the collective silence around climate change.

Finally, I am nearly complete with the third draft of a memoir, Waking Up from a Biblically Induced Coma. It is a Biblical Memoir. I explain how I got trapped in an anti-gay fundamentalist world and ultimately escaped, and the lessons I learned along the way. Woven into my narrative I also tell Bible stories in my strange, but I hope thoughtful, way.

You can read part one of our interview here.

This interview first appeared in issue 153 of Movement magazine. To request a free copy, please contact the office.

Tags:
Climate Change
Theology
< Back to all blogs