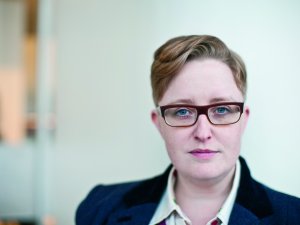 Tell us a bit about yourself and your faith journey.

I’m Chief Executive at Stonewall which is the LGBT charity in the UK, and I’ve worked here for about a decade. I’m a practising Catholic – I was brought up a Catholic, but reaffirmed my faith as I was growing up, as a teenager. As an adult I’ve always found a home within the Catholic Church, and my faith is very important to me.

We’ve published a resource for Student Sunday on the theme of ‘All Are Welcome’. We know that some LGBT do not find churches to be welcoming places. What has been your experience?

I’ve never experienced a particular problem in the Catholic Church, but I think that’s because the Catholic Church has its own issues and doesn’t obsess about this in quite the same way that other churches do. My partner, who’s atheist, came to Midnight Mass with me last year, and the priest at my church was incredibly welcoming, and warm, and very clearly acknowledged that we were a couple. That was very moving, and very important to me that my partner, who had every reason to be sceptical, was welcome and was part of that community. And I think it was very straightforward for him to do that, but it made an immense difference to me and I think that his actions were hugely important. I think it just goes to show that these things don’t have to be very highly contracted, governance reviewed processes, and it’s basically about human kindness and decency and courtesy to people who are part of your congregation.

Can you tell us a bit more about Stonewall and the work that you do?

Stonewall has been going for 27 years, and we do everything in our power to help people make wherever they live, work, socialise, play or pray a more welcoming and inclusive place. I’m very proud of the work we’ve done with all faith communities, particularly of our work with schools. We’ve actively worked with individuals to help them tackle bullying in their school in a way that is completely congruent with their faith and philosophy, and have been helping them to find role models and LGBT people of faith to talk about their experiences. I think one of the things we’re very aware of at Stonewall is that young people need to see people like them, and to know that LGBT people don’t need to abandon their faith because of their sexual orientation, and that faith is an incredibly important part of personal well-being – someone’s relationship with God shouldn’t have to be abandoned because of their sexual orientation. So we work very hard to make sure that we do everything that we can to support schools to do that work well, and we’re very proud of the work we’ve done there.

More generally, Stonewall has worked with LGBT Christians to help them work out how they might be able to influence some of the discussions that are happening at the moment, the Shared Conversations of course and some of the debates that are happening within Synod, to try and move some of these issue forward, and move the away from something that is a first order issue, into something that is actually about living the ways of Jesus through pastoral care and support. It’s been important for Stonewall to play a role in that, but also to support LGBT people of faith to find a voice in an arena that can often feel very personal, and very dismissive of their lived experiences.

We understand that Stonewall has brought together Christian campaigning groups to work for change in the church under a project called the LGBTI Mission. Could you tell us more about that?

LGBTI Mission is an organisation that’s been brought together by existing LGBT Christian groups, and they asked Stonewall to come in and provide some support for that. What we’re good at is running campaigns, we’re good at getting messages right and helping people articulate what’s going on, so they came to us and asked for our help with that, and Stonewall was pleased to offer it. I think what they realise is that this is a time of immense opportunity for LGBT people, and those who are not LGBT but support the church being a more inclusive and welcoming space for LGBT people, and they wanted to make the most of that. I think they’re doing an excellent job of articulating the issues and their website, lgbtimission.org.uk has a lot of really good information about what an inclusive church might look like and how we can get there.

What do you think churches could do to be more welcoming to LGBT people?

I think the first thing is to acknowledge that some of the congregation might be LGBTI, or have LGBTI family and friends. Some of the most sad stories I’ve heard are where grandparents or parents have felt that they had to leave the congregation that they’ve been going to all their lives, that their kids have being going to, because of what is quite frankly political hostility from the pulpit, or from those in positions of power, against LGBTI people. I think there’s a real difference between exploring matters of faith, and doctrine and liturgy, and basically developing what can only be described as a very unchristian position on LGBTI equality, and I think what lots of churches are realising is that churches should be a welcoming place for all who are seeking to find Jesus in their lives, and to be closer to God, and that there shouldn’t be a hierarchy of who’s allowed in, which is such an antithesis to Jesus’ way, and his vision of what the world should look like.

I think there’s some really interesting things going on in what’s called Inclusive Churches, where welcoming statements are made very clearly on their websites that say that everyone is welcome, where it’s clear that same sex couples are very welcome to come and have their children baptised. We’ve heard at Stonewall that some same sex couples have been turned away from baptisms, which of course is against the teachings of the church – no child should ever be refused a baptism. There’s some really bad practise out there but also some good, like just taking care to acknowledge people – one of the powerful things that my priest has talked about is the diversity of his own congregation, and how much he welcomes and values that, saying that there are people who are single, and people who are finding their way, or might have been adopted, or are in same sex relationships, and being included in a list of things that he was describing as good was very affirming for me, and I that’s what it’s about. It’s not necessarily always about taking a very fixed view on these issues because that’s not where everyone is at, but it is about creating an environment where everyone feels able to find Jesus, and find God.

How does your faith shape how you see the world?

I think that it’s something that we brits aren’t very good at talking about, but at Stonewall we are very acutely aware that who you are makes a difference to how you behave, and how you act and do things, and that how you do something is as important as what you do. And there are people of faith, and indeed people of no faith, who hold a very strong idea that how people behave is important.

What I find as a Christian, and as a Catholic, is that trying to ensure that the values that are integral to the Christian faith shape my approach and response to the challenges in all areas of my working life is very important for me. Stonewall supports people to find their way on some of these issues, and we don’t judge, or name and shame, and we work very hard to find consensus and build consensus, to build bridges between communities. That to me feels very Christian. An even though as an organisation we’re agnostic, that’s a very fundamental part of Stonewall’s ethos.

Eradicating injustice motivates me. Ensuring that people have exactly the same opportunities as others even if they not born with the same access to different things, and that no one is left behind. That’s absolutely integral to me, that we treat others as we wish to be treated, that we forgive those who trespass against us, and that we do everything that we can to make the world a better place. That’s what I’m all about, what I’ve always been about. I’m not always great at it of course, but I try my best.

How do you keep going when things get difficult?

I have an amazing team at Stonewall who are utterly committed to keeping soldiering on when those who are against us are getting louder and louder, and we always know that the fight we’re having is about people who are in a position of not being able to fight at all. And there are huge levels of vulnerability amongst members of our communities, particularly those who are excluded from home, or their congregations or their schools, who really struggle to find a way. However tough it gets for us, we’re actually about those that are fighting a bigger fight, and making sure that the world is a better place for them.

Lots of people inspire me. I think that Archbishop Justin Welby is doing a pretty difficult job at the moment, and trying to keep it all together. He’s certainly someone who inspires me. I’m always inspired by the young LGBT people I meet who are turning often difficult situations into positive ones, not only for themselves, but they’re also doing their best to make the world a better place for those who are coming after them. I think that is utterly utterly admirable. There’s a lot going on at the moment and we need more heroes, more people who are looking beyond themselves and looking to make the world a better place and I think the LGBT community has a lot of those to offer. It’s a real joy to be able to work with them.

Do you have a favourite piece of scripture?

I think it’s the most profound level of loyalty and commitment to God and to another human being that it’s possible to express. It’s beautiful.

What advice would you give to students?

Generally? Work hard, don’t get too drunk. I think being a student is such a major transition time in people’s lives that it’s easy to let go of some of those things that keep you anchored, and if you do have a faith find ways to nurture that faith. Don’t lose sight of your needs. It’s a time of meeting lots of people, so be ready to have your mind changed on things.

If you could have been born in any period in history, when would you choose?

This one. It’s the best one. This is fine thank you!

Do you have a favourite book?

I’ve got lots of favourite books, but probably Four Quartets. It’s a poetry book by T.S. Eliot. It’s the most amazing exploration of the fate facing our modern word and spirituality, and how it all fits together. It’s a deeply moving book.

You have a very busy job - what do you do to relax?

I cycle, and I swim, and I read and I like good quality television and I make sure I go to church once a week. Going to church is an incredibly important part of my grounding rituals.

This interview was first published in issue 155 of Movement magazine in January 2017. You can read the rest of this issue here.