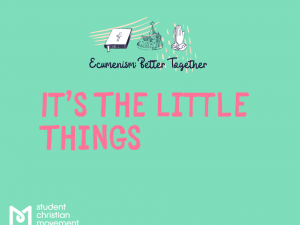 Don’t worry. I’m still a Methodist! But the local Methodist church was few in attendance and those who did attend were of a certain age. What was I to do? Give in and start attending the local C of E church where my friends went? Well, yes, actually.

This was not the first time that I had been to a non-Methodist church – in my first week of university I attended a Baptist church, but it really wasn’t for me. Going to an Anglican church was different, though. For most of my adult life, it had felt like being a Methodist was defined against being an Anglican. Methodism, of course, was a breakaway faction of the Church of England. Both local C of E clergy in my area and Anglican friends at university have often joked that covenants between the Methodist Church and the C of E were the first step in the Anglicans’ plan to merge the two churches! The thing is, there’s not that much difference between the two denominations. I think that’s why we have to pretend that we’re so different from each other; precisely because we’re so similar. At least, that’s been my experience.

Anyway, I swallowed my pride and attended the local Anglican church. It was remarkably similar to Methodist services that I had attended regularly throughout my life. The communion wine was non-alcoholic? They used bread instead of wafers? It all felt very familiar. And yes, there were differences too. Communion wine was taken from a chalice, not what an Anglican friend described as the ‘Methodist shot-glasses’ that I was used to. There were also more call-and-response parts to the service. More importantly, however, the Anglican church that I attended was just as welcoming as any Methodist church I’ve been to. The particular church that was local to me was also much more affirming of LGBT+ people than any church I attended before or since. So, I’ve attended this church occasionally when at university. I don’t live in the area anymore, and I delayed attending regularly until the last couple of months of my university degree. Yet I am so grateful that I had that experience of an Anglican church. Now I think of Anglicans as friends and comrades, rather than something to define myself against.

I still prefer a Methodist service to an Anglican one, but only because of the little things. When it comes to the big things, I’m more than happy to work alongside the many lovely Anglicans that I know.

Written by SCM Member Nathan Olsen. Nathan is a former member of SCM Leeds, graduating this summer with a BA in Politics. He starts a Masters at Sheffield in September, and is using this summer to explore various kinds of theology.