'It looms over you': SCM responds to Conservatives' tuition fees announcement. 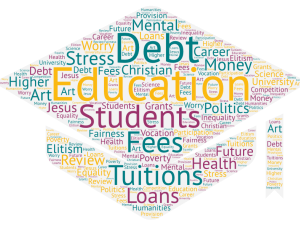 The Student Christian Movement (SCM) welcomes the review into post-18 funding announced by Teresa May yesterday (Monday 19th February). However, members have expressed concern that the review does not go far enough and have called for a radical overhaul of the tuition fees and loans systems. The current system is in need of an urgent overhaul to ensure that all students have fair access to Higher Education

There is concern that by only tinkering with the system, rather than looking at positive and sustainable ways to fix it, is only paying lip service to the problem. Additionally, creating a disparity between arts and humanities, and the traditional ‘hard’ subjects and vocational courses, will create a two-tier system that favours non-arts subjects and devalues humanities. Ultimately this may lead to a decline in students taking up these important, life-enriching subjects.

Speaking to Premier Christian Radio’s News Hour yesterday, SCM member Adam Spiers said “Student debt looms over you. You’re always terrified of what you have and haven’t paid. Some people just give up on it. They just bury their heads in the sand because [the debt] is so huge they don’t want to think about it.” A recent Student Money Survey by Save the Student found that a rising number of students worry about making ends meet, and half of all respondents said that their mental health had suffered as a result of money problems. University is already a stressful time for many, and the added burden of uncertainty around finances is not conducive to good study.

SCM and its members believe that funding ought to allow access for all and not just those that can afford it. The current system is not fit for purpose, with those with the narrowest shoulders being burdened with the heaviest loads due cuts to maintenance grants and the sharp rise in fees. This is unfair and it is damaging to the wellbeing of young people and students who are expected to compete on an uneven playing field.

Adam Spiers also said: “We need to move away from this idealising of competition…I’d like to move more towards a communitarian approach, taking in to consideration the preferential option for the poor as well. Over nine thousand pounds a year is not good for poor and working-class people.”

Spiers suggested treating post-18 education funding like the NHS, saying: "Look at things like our NHS... that is free at the point-of-need but we pay for it later through our taxation system and I don't see why the same system shouldn't be applied to higher education."

84% of students worry about making ends meet, up from 80% last year, and 50% worry about the impact finances have on their mental health:  https://www.savethestudent.org/money/student-money-survey-2017.html

Tags:
Higher Education
< Back to all blogs