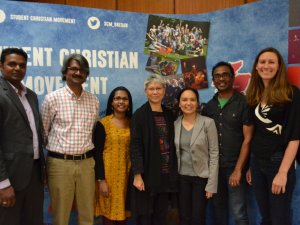 Necta Montes is WSCF's interim staff coordinator, currently heading up a transition process within the federation. From 3 - 8 August, staff and officers from the WSCF global team met in Birmingham for a week of workshops and discussions. We saw down with her to talk about the federation's future and her hopes for what the transition can achieve.

Could you tell us a bit about yourself and your role at WSCF?

I am currently WSCF’s transition coordinator and a senior friend of the SCM Philippines. Until 2012 I was regional secretary for the WSCF AP office. Before that, I was involved in the Philippines movement as a student and then joined the staff team after graduating. I have probably been involved with the federation for over half of my life!

Looking back over your involvement, what changes have you seen happening? What’s the source of motivation for you now?

When I joined SCM Philippines, the movement was huge, with membership in the thousands. It was one of the biggest student movements in the Philippines – the country was under a dictatorship at the time and lots of students mobilised in resistance. We saw a lot of repression of student activities as a result. Since then, the life of the movement has changed dramatically. I’ve witnessed the movement weakening but also picking up and becoming stronger once again. There are times when the movement is strong because of the internal context, and there are times when we see ebbs and flows in size. I think this is happening in SCMs all over the world.

You came to help out WSCF Global at quite a tough time – what made you decide to take on this challenge?

I believe that once you are an SCMer, you are an SCMer forever! I have a commitment to the movement, which means that whenever there is a calling for me to help, and to contribute to the ministry of WSCF, I’ll be there. This has been a calling I think that was very clear and I thought my skills, knowledge and experience maybe could be helpful in this time. I love the federation and the movement, maybe that’s something that’s common to all SCM friends.

You’ve had a lot of meetings this week, thinking about new staff, restructuring etc. Do you feel you’ve made progress? What do you hope will come out of these meetings?

I’m very positive and very hopeful of the results of this meeting. The work of change within an organisation is a very daunting responsibility and it is not going to happen overnight. It won’t just be the task of one committee like the transition team. We need the staff and officers involved, we need to bring the executive committee and the movements into the conversation. Among the staff and officers, my feeling is that we are now in a common understanding – I think that’s very important.

Secondly, many of the issues raised in the process of the transition have been addressed, such as the location and possible relocation of the IRO office. This has been a longstanding debate within the federation, whether or not to keep the office in Geneva or to move somewhere else. The initial debates were around finance, because it was very expensive. But in this workshop we also tried to look at other criteria. Moving the office is not only about finance, it has to do with the mission of the ecumenical movement, where this direction will come from will be very important, especially 5-10 years down the line. And we need to have partners like the World Council of Churches and the Lutheran World Federation – these are ecumenical partners we have had for years – to be on board in this conversation because we are one family with them. The decision to move out of Geneva is of course our independent decision and we have to have a clear reason but it has to be in conversation with other ecumenical organisations.

Necta Montes was speaking to our Groups Worker Lizzie Gawen during the Staff and Officers meeting of the WSCF, which was held in Birmingham from 3-8 August 2015.