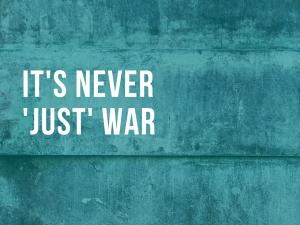 Look! Christ in khaki, out in France thrusting his bayonet … No! No! That picture is an impossible one, and we all know it.

I am a reluctant pacifist: I like uniforms, reading about War War One, and look forward to the day when puttees make a comeback and are super fashionable... On the other hand I discovered Anabaptism and Jesus-centred pacifism quite dramatically whilst in hospital; I was quickly converted from red poppies to white ones and started reading about “just” war from an Anabaptist prospective.

Once I started looking into non-violence, I realised not only is Jesus’ third way an extremely successful method to witness to the Upside-Down Kingdom of God whilst bringing forth change for the oppressed and conversion; but also that the “war to end all wars”, the “war on terror” and all similarly titled “just” conflicts were not just the object of massive PR spins but also the cause of much of the suffering and death they were meant to stop. To my surprise, even World War Two failed the traditional requirements for “just” war, and could have most likely be avoided if the pain and horror of the Great War had been dealt with without vindictiveness and retribution.

As a Christian I confess that “the Spirit of Jesus empowers us to trust God in all areas of life so we become peacemakers who renounce violence, love our enemies, seek justice, and share our possessions with those in need” (as the Mennonite World Conference puts it). But as a practical person I am also aware that the truth of peace does not come just from me being a Christian, or from the Christian Faith in general. The Truth proclaimed by the "Forgiving Victim" is not just the matter of creedal affirmations, it is also a reality that has become more and more evident that we need in the aftermath of Hiroshima and Nagasaki, as people of all sorts of background rose up to protest Vietnam, Afghanistan, and nuclear weapons themselves."

Stanley Hauerwas famously said that the Church is called to be (not have) a social ethics for the violent world. It is time for the Church to rediscover its call to be a community witnessing the Kingdom and for all of us to be reminded of our call to be peacemakers, ambassadors for the message of reconciliation (2 Cor 5:19) proclaimed in words and deeds by our Lord Jesus Christ and attested by the power of God in his resurrection. History has rebuked us in that when the Church was silent even the stones were crying out for the Peaceable Kingdom (Luke 19:40), I think it is time for us to reclaim our vocation and follow the path of discipleship not only in our personal lives, but also speaking truth to power to a world that never tires of proclaiming the lie of war.

Written by Simone Ramacci, an SCM Member and Lay Pastor.

Tags:
Seeking Justice
< Back to all blogs