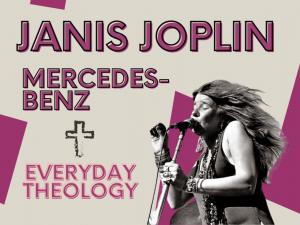 Janis Joplin’s song Mercedes-Benz was recorded just three days before her untimely death on 4th October 1970. After describing it as a song of “great social and political import”, Joplin inquires “oh Lord, won’t you buy me a Mercedes-Benz”, a colour TV and a night on the town. For all her hard work and good behaviour, she sings, “I’m counting on you, Lord, please don’t let me down, prove that you love me and buy the next round” (i).

Joplin’s song draws inescapable links to the Christmas classic, Santa Baby (1953), in which Eartha Kitt delivers to Father Christmas a verbal wish-list ranging from fur coats and cheques to a mining deed. A list estimated to reach over $1 billion (ii), the song typifies this desire for needless offerings of adoration gifted from the pocket of someone else. Consumerism, which refers to the excessive buying and selling of material goods, is portrayed in both songs as a pre-requisite for happiness. Consequently, it can be debated that Father Christmas’ “special status” as capitalism’s favourite bearded philanthropist is much down to his “resemblance to Christ” (iii). Both being figures of judgement and omniscience (iv), children are taught from an early age that consumerism at Christmas is not only desired, but expected. It functions as a rule of God.

A parasocial relationship occurs when someone is “repeatedly exposed to a media persona” causing that person (a fan) to develop a “sense of intimacy, perceived friendship, and identification” with that celebrity (v). Applying this concept to the Christological likeness of Father Christmas, a relationship we revisit on a yearly basis, God is misrepresented as having a similar lax perspective on consumer restraint. When Santa is shown advertising chocolate, fizzy drinks and toys, this has “a positive effect on consumer attitudes” (v). Thereby, in an annual parasocial relationship with the icon of unapologetic self-indulgence, consumers feel validated in their decision to spend. As such, by associating God so closely with the Coca-colonised Santa, the idea of being given a gift from God - the more material the better - becomes a parasocial expectation.

Thereby, when Joplin tells God to “prove that you love me” with a Mercedes-Benz, she mistakes the charity of faithfulness (Matthew 25:31-40 NRSV) with the commodification of Christianity most notably at Christmas. She turns her relationship with God, as Kitt has done with Santa, into a transaction. For Bourdieu, gifts create “a debt, a lasting obligation” under which any inclination of selflessness is undermined by the social pressure to return to the giver something of equal value (vi). However, parasocial relationships are “controlled by the performer”, or consumer, “and not susceptible of mutual development” (vii). In turn, this prevents consumers from experiencing spiritual growth or flourishment (eudaimonia). Thereby, as society falls deeper into a parasocial relationship with the media, particularly at Christmas, we as consumers may be inhibiting the eudaimonia of all humanity when we pray to God for gifts. In exchange for Joplin’s hard work and good behaviour, the grace of God has been turned from a gift into the expectation of reward.

For sociologist Bourdieu, religious belief promotes an itch in the “left hand” of consumers, pulling them towards God and encouraging them to “give money” and spend reverently (vi). According to Ostwalt, however, these misapprehensions associated with parasocial relationships “pertain not to the decline of religion per se but to the decline in religious authority” (iii). “Santa Claus is a sacred figure for a secular world” which, at the end of a busy day, celebrates wealth with a Coca-Cola (iv). Despite many academics believing that “the sacred and the secular have been ceaselessly combined and recombined” (iii), during the Christmas season these two systems collide. By asking God for a Mercedes-Benz, Joplin’s song epitomises the commercialisation of Christmas and destabilisation of Christianity when we decided what God owes us for our belief.  This is not an example of the religious being combined with the secular. Rather, it demonstrates the ways in which the secular will distort the public’s fascination with religion until the Christian God fits neatly in a chocolate tub.

Raniero Mancinelli has styled three popes. He claims that since Francis’ papacy began bishops and cardinals have begun requesting “simple crosses of wood and metal, skipping the gold-plated, gem-encrusted versions that were once popular” (viii). Pope Francis, in demonstrating simplicity despite his grand status within the Catholic Church, is making minimalism fashionable: removing gems from his pellegrina and wearing cotton clothes and black shoes, Francis has become a religious representative for the near-global necessity for consumer restraint. Those in relationships dictated by parasocial phenomenon require “social involvement or gratification” in order to maintain their loyalty to a brand or celebrity (ix). For Pope Francis, however, “the point is not that it is blessed to be starving and destitute” (x); rather, it is to understand that those “poor in spirit” (Matthew, 5:3-12) are wealthy because they do not need fur coats and cars to feel close to their deity.

‘Reverent consuming’ refers to the idea that we should ask only for what we need. If buying a necklace or a new jacket will bring you joy then don’t hesitate to treat yourself. However, be wary that consumerism often brings only fleeting happiness. It is important to be thoughtful about what material objects will actually make us happy and to understand where these goods come from. Try to spend more reverently this Christmas: ask for a few things, special gifts that will contribute to your hobbies and interests or make you feel more confident; give your time and money to a charity you admire; think more about what Christmas means to you as a Christian and not as a consumer. If you’re able to, try to continue to think reverently about your spending for the rest of the new year too.

Notably, even Christ enjoyed the expensive perfume given to him by Mary Magdalene (John 12:3). This suggests that not all indulgence is unethical, however “money has overdetermined the meaning of Christmas” in the 21st century (iii). As a result, through the commodification of the Godhead, transcendence has been bestowed upon the material and the mass-manufactured, which propagates environmental degradation and spiritual collapse alongside economic flourishment. Joplin’s song represents advertisers’, perhaps subliminal, exploitation of sacred imagery during the holiday season. However, it’s up to us (the consumers) as to how we want to behave. Father Christmas has become a store-bought deity, but our duty to God and to each other has never gone away.

I will leave you with these two questions:

Pope Francis calls consumerism, a seemingly secularist celebration of affluence, “a virus that attacks the faith at the roots” (xi).

Can religion and consumerism co-exist?

If they can’t, which one will you choose to live by?

(ii) Bump, P. (2018). ‘How much would the gifts from ‘Santa Baby’ cost? From fur coats to luxury apartments’, The Independent, 20th December. Available at: https://www.independent.co.uk/news/long_reads/santa-baby-song-gifts-cost-eartha-kitt-christmas-presents-a8686636.html (Accessed 16th December 2020).