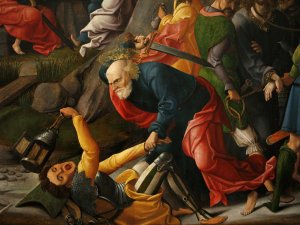 The shooting in Las Vegas is still fresh in my mind, partly because it was such a short time ago, and partly because it is the type of thing that happens too frequently in America. This happened in the country that has some of the highest church attendance in the West, where politicians readily proclaim their Christian faith openly when they campaign. These same politicians also proclaim their protection of the constitutional right for every citizen to own guns, and with few checks on the person who is purchasing them. The statements about guns are more frequent than the profession of faith, which should make one wonder which is more important. You can even find preachers on YouTube telling you that guns are good!

Jesus didn’t talk much about weapons and what to do with them. He never called on his disciples to form an army or wage war against the Romans. We have a couple of instances where he has interactions about swords. One is an encounter at the Last Supper where the disciples want to take swords with them (Luke 22:35-38). Jesus tells them that they need to take those, so he will be included with the law breakers (Isa. 53:12). It is interesting, to me at least, that the time Jesus tells his disciples to have swords is so that, when he is arrested, he will be part of a group of lawless people, making the charges against him more likely to be believed. I think it must be kept in mind that if only two of Jesus’ followers, who weren’t even soldiers, were carrying swords, then they would have stood no chance against men who were trained to fight!

The use of the sword by one of the disciples helps to secure Jesus’ guilt in the eyes of the Temple leaders and Romans, who were present. After the disciple cuts off the ear of high priest’s servant, Jesus rebukes him and then heals the ear of the servant in front of the arresting crowd. (Luke 22:47-53). His act of healing must have had some of the people in the arresting party think twice about what they were doing.

In all the rest of the time that Jesus is with the disciples- teaching, healing and drawing crowds-  we never hear him talk of needing weapons or justifying their use. He never plans for an army or militia to help him lead the people of Israel or overthrow the Romans. Two prominent commands from the Sermon on the Mount- love your enemy and love your neighbour- would suggest to me that weapons would go directly against Jesus’ teaching. And, since Jesus spent a good deal of time healing people, it would make no sense for him to simultaneously tell people to injure or kill (thereby placing people in need of healing instead of healing them). This would be quite contradictory to his message.

Americans love their guns. They seem to believe that a “good guy” with a gun will make things right. They of course believe that World War II was a victory for the righteous over evil. And, they go to church. A lot. But, it seems that in churches they don’t talk about what it takes to love your neighbour. They don’t talk about the fact that killing people doesn’t overcome evil. They don’t seem to talk about the idea that killing people is in fact evil in itself. They will proclaim that people need to repent and make themselves “right with God”, but they never quite recognise that a dead person has no ability to do this in the way they believe it needs to be done, i.e. before death!

I have never been able to understand how shooting someone is ever loving. As the event in Las Vegas shows us, it is horrendous and causes a great deal of pain and grief among those who survive and among loved ones of those who don’t. The Las Vegas shooting was an action which led to a great need for healing, both physical and emotional. Much of Jesus’ ministry included healing.  None of Jesus’ ministry included harming or killing or the justification of such. The desire to have the power to kill must come from someplace other than the teachings of Jesus or from our relationship with him.

Mike Nimz is a Mennonite Pastor from the US and now lives and works in the UK for the Anabaptist Network.