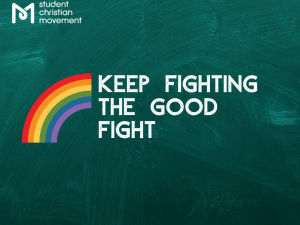 In June 2017, the Scottish Episcopal Church voted to legislate for marriage equality within the Church. That was a life-affirming and life-changing moment for me, and for friends and strangers across Scotland and around the world. I'd joined the General Synod of the Scottish Episcopal Church in 2013 because a good friend asked if I would agree to be nominated, and, when I asked why, he said, "Because if we're going to change the world, we have to start somewhere."

Recipe for changing the world

If you asked me to write a recipe for changing the world, it wouldn’t look quite like it does in the films.

Friday nights making placards on your floor with felt tips.

People who think you're an abomination and aren't shy about saying so.

Losing. Trying again. Losing better. Bursting into tears in the middle of a main road in Edinburgh after losing again. Always having enough Kleenex.

And the thing is, I would do it all again.

Building the Kingdom of Heaven

I come from a faith tradition that believes in making the world a better place, and in taking our part in building the Kingdom of Heaven on Earth. We are all baptised in the same water as the God who healed the sick and raised the dead, who fed the hungry, who lifted up the oppressed, and who challenged authority and changed all the rules. We are the living body of the Christ who told his apostles to go; to go and change the world.

The years of the campaign for marriage equality in the Socttish Episcopal church saw the idea take hold on an international level. It spanned a time that saw the New Zealand parliament singing a Maori love song after approving a gay marriage bill, all of Ireland going #HomeToVote on marriage equality, and the interns delivering the news that the same-sex marriage ban had been ruled unconstitutional on the steps of the United States Supreme Court. It was a time that felt as if the beacon of equality and justice was lighting up the world.

We are living through times when the work to keep alive that flame of justice and equality feels like a fight, and it feels like a fight every single day. We are living through a rising tide of racism and white supremacy, of violence against women, of transphobia, of the emergency of climate change. It is imperative to not sit idly by, but we struggle to know what to do and oftentimes it feels as though we are fighting a losing battle.

The campaign for marriage equality in the Scottish Episcopal Church was always about more than marriage, and it was always about more than the LGBT community. It was about who we wanted to be; whether we were a Church where there could be room for everyone and a Church where the words, "all are welcome in this place" could be true. It was about our attitude to people who are a little different from ourselves. It was about how we behaved and how we will behave when faced with issues of social justice, and whether we were and will be willing to play our part in dismantling systems that have kept the oppressed oppressed.

Those are the questions that are still facing the world and the Church. I never believed we would win. We kept saying the same words to one another: "It won't ever happen, but we have to try."

We can surely do it again.

I still think about those times; all those years and everything we did while we absolutely believed that we thought we were going to lose. Because what we did was life-changing and world-changing and I'm proud that we did it, but what I will always be proudest of is that even though we thought we were going to lose, we did it anyway. It is a thought worth holding onto, in these days and in the fights that are to come.

Because nothing that means anything comes without risk.

Because the victories worth having are never in the sure things.

Because the losing battles are the ones that need fighting most.

Because we are trying to build the kingdom of heaven on Earth.

And because changing the world is not in the winning, but in the knowing you might not and then trying anyway.

Written by Dr. Beth Routledge. Beth studied at the University of Durham and the University of Glasgow, and now works as an acute physician in the West of Scotland. She is a member of the Scottish Episcopal Church and has been a lay representative to its General Synod since 2013. She was the convenor of Changing Attitude Scotland until 2017.

Top Tips for First Time Protesters
Doing Enough? Activism and Protest as a Person of Colour
A Liturgical Perspective on Climate Change