Learning To Be My Whole Self 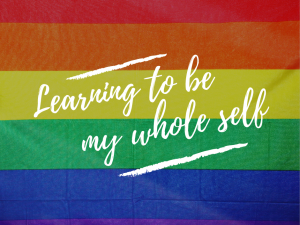 I’ve been a Christian for as long as I can remember. In late 2014 I figured out I was part of the LGBT+ community, too. For a long time, especially whilst I was still figuring out exactly who I was, these two identities were very much separated in my mind. Having grown up in a traditional Church of England parish church I didn't have any LGBT+ Christian role models to look up to and had never knowingly met any openly LGBT+ Christians. I didn't feel that the two identities were incompatible as such, I just felt that I could only show one identity at a time, and I wasn’t sure what the Bible had to say about any of it either.

Then, in the summer of 2017, I attended Greenbelt festival for the first time. I went on my own as a volunteer, and although I didn't really know much about the festival I did know that it was LGBT+ friendly. I was rather nervous about being involved with LGBT+ talks and meet ups because I wasn't very confident in my own identity as a queer woman, let alone having my queer and Christian identities overlap. I was also concerned about what other Christians' might think about LGBT+ people, even though I knew Greenbelt was an inclusive community, so it was a nerve-wracking time for me! I wasn’t out to my parents and therefore not out to my church, so even wearing a couple of pride flag pin badges on the bag I used over the weekend was a big deal.

I didn't intend to go to many LGBT+ talks, and I was too scared to attend the LGBT+ meetup organised by OuterSpace (the LGBT+ presence at greenbelt) but did find myself at several LGBT+ talks and discussions, partially on purpose and partially by accident (or divine providence!). A couple of these were particularly memorable for me.

One of the first talks I went to was by John Bell, titled "Rampant Heterosexualism". At the end of his talk, John came out as gay. At the time I didn’t know who John was, so I didn’t realise until I looked online when I got home how much of a big deal that must have been. Regardless, it felt special to be at his public coming out, and seeing the large audience provide a long and effusive standing ovation helped me accept that Greenbelters were affirming of LGBT+ people.

Later on in the weekend I went to a talk by American Episcopal priest Liz Edman, titled "Queer Virtue: The Power of Queerness to Reform and Revitalise Faith". Before Greenbelt I was not comfortable with calling myself queer, as being asexual I felt I was a member of the LGBT+ community but not part of the queer community (even though these are pretty much the same thing!). But over the hour of Liz's talk she made me feel that I could use the word queer to describe myself and helped me see how I could fit in as a queer Christian. I never expected to learn to feel comfortable calling myself queer, let alone in a Christian space! I spoke to Liz after the talk which made me quite emotional (in a good way), as she was the first clergy person who had not only said my queer identity was okay but affirmed it in a way that showed me God was happy about who I was.

Although the talks I attended were important to me, I also got a lot out of simply seeing LGBT+ Christians out and about on the festival site. People that were clearly queer, happy to talk about their identities and share their stories, confident of their overlapping identities. I don’t remember explicitly talking to any of them, but I was finally able to see the visible role models I’d been longing for. I wasn’t desperate for “famous” Christian role models, just ordinary Christians like myself who were happy being themselves and showing it was perfectly okay to be a Christian and identify as LGBT+.

Greenbelt 2017 was one of the most important times for me and the intersection of my religion and queer identity, and my queer identity in general. My confidence in my identity as both an LGBT+ person and as a queer Christian has improved since then, but Greenbelt kick-started it for me, and allowed me to see that I was by no means the only one.

Do you have a similar story of learning to love your identity as a Christian in the LGBT+ community? We'd love to hear about it! Send us your own stories to ruth@movement.org.uk or leave a comment below.