Lent Me Your Ears: Perspectives on Lent (part one) 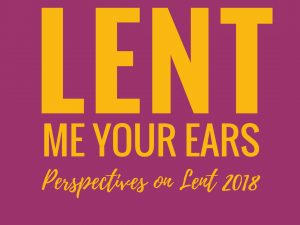 When I was growing up, I was told two things about Lent: first, you’ve got to give up something that’s bad for you; second, you shouldn’t resume whatever it was you gave up once Lent was over. Since I started university, I have wondered if these things are true.

My ruminations have led me to one conclusion: no. I would argue that that which you give up for Lent does not necessarily have to be ‘bad’ for you, nor does it matter if you continue your Lenten fast after Lent is over.

A few years ago, I did give up something bad for me. I gave up chocolate, sweets, and biscuits. My experience with this was much the same as it is every year: at the beginning of Lent, it is massively difficult to keep the fast, but it gets easier as Easter Sunday approaches. Yet in those initial two weeks when I would find myself at a loss of what to have for a snack, I was reminded that the reason I could not have what I would normally have was because it was Lent. This reminder, more than that sweets, chocolate, and biscuits are unhealthy, was important to my spiritual life and growth.

On Easter Sunday that year, I ate an Easter egg for breakfast. It would take me a few more years before I gave up eating chocolates and sweets and biscuits every day, but I did not think that I could never eat them again once that Lent was over. I perhaps should have done, but only because those things are unhealthy. Where that which is given up is not bad for you, there is no reason to believe that Lent should carry on beyond Easter Sunday. Lent is a period of time, as it was for Jesus in the desert, and it is the contemplation of Christ which should be carried forward, not the sacrifice.

Lent Me Your Ears: Perspectives on Lent (part two)