Lesbian Love as Vocation: My Journey as a Roman Catholic Lesbian 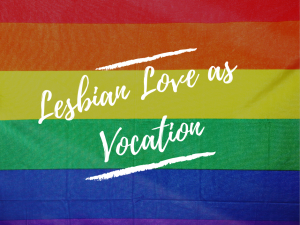 I cannot tell you the moment I decided to first identify as or tell people that I am a lesbian, but I distinctly remember the moment I “realised” I was called to love women as well as men (or so I thought. This later turned out to be “rather than men”!). For a lot of people such an epiphany might cause confusion, dread, fear or even self-hatred. For me though, the thought that ran through my head was, “God is calling and allowing me to love 100% of the world, not just 50%!”. It felt liberating and joyful. How could that not be a true blessing?

That’s not to say straddling the gaping divide between the Roman Catholic Church and the LGBTQ+ community is a walk in the park. A few days ago, there were calls for an ‘end’ to the ‘homosexual agenda’ from two cardinals. The Catechism of the Catholic Church still uses loaded and hurtful terms such as “intrinsically disordered” or “objectively disordered” in reference to homosexuality. Various Catholic websites talk of so-called “Same-Sex Attraction” (abbreviated to SSA) – implying that “real” or “faithful” Roman Catholics wouldn’t refer to themselves as gay, lesbian or bisexual. Whilst I don’t experience the level of personal hurt, persecution or stigma that other LGBTQ+ brothers and sisters do, I feel sad I cannot marry in my parish church.

Quite a few people mistakenly think that it must be really difficult for me, being a lesbian Roman Catholic (and a South Asian one to boot). I honestly think others are more bothered by it than I am! At my core, I see no conflict between these two things at all. I am certain of God’s love for me; yet I am also certain that He called me to deeply love two women at separate points in my life. It wasn’t entirely platonic but it wasn’t romantic or sexual either – such relationships can be hard to put into words that others understand. Reading The Four Loves by C.S. Lewis was life-changing in helping me to understand that these loves were forms of agape and that there was nothing wrong with them.

For several years now, I have seen my identity as that of a beloved child of God - nothing more and nothing less. Who I love or how I love them does not change that in the slightest. I take great comfort and strength from this knowledge, as well as the continued love and support of so many Christian friends of mine upon my ‘coming out’ to them.

It’s not always ideal being a lesbian Roman Catholic and sometimes one wonders whether it’s worth the aggro from both sides. But like St Thérèse of Lisieux, I can truly say “my vocation is love!” and try to embrace that wholeheartedly by loving as much as I can and dare to – even if that’s deemed “intrinsically disordered” by some.

Written by an anonymous SCM Member.

Tags:
LGBT+
LGBTQIA+
< Back to all blogs