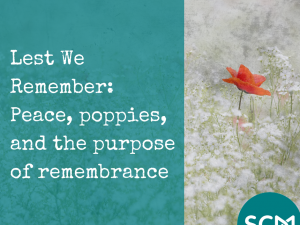 In these past few years, the run up to Remembrance Day has brought about arguments on my Facebook timeline about the colour of the poppies people choose to wear. Remembrance poppies are deeply symbolic, and hold a lot of meaning for a lot of people in different ways. Whether or not you wear a poppy or what colour poppy you choose to wear takes on the significance of whether or not you respect the dead, whether you are a snowflake pacifist or a jingoistic nationalist, your allegiance or otherwise to your country, and your sympathies with every ‘enemy’ we’ve ever fought in the horrific wars we vow on the 11th of November never to repeat.

Red poppies have traditionally been worn to remember those who died fighting in the world wars. They were first inspired by the poem ‘Flanders’ Fields’ in 1921 and, as a symbol of remembrance, the proceeds were used to support veterans. White poppies originated in 1933, created by the Women’s Cooperative Guild to explicity symbolise their opposition to war and to promote peace. Some people claim that poppies have been over politicised or used to glorify war and decline to wear one at all, some people wear one or the other or even both. It is a personal decision, and to a certain extent there are fair points to be made on all sides.

But these arguments always seem to me to miss the mark. Yes, it is important to appropriately mourn the losses our world has suffered through war and conflict. But whether you do that through red poppies, white poppies, or no poppies at all, what is most important is how our acts of remembrance on this day impact the way we live in the world all year round.

This is what seems to be missing from most remembrance rhetoric I see. Remembrance Day has been completely separated from discussions about the wars that are still being waged, and the lives that are still being lost due to the tragedy of war. Poppies are worn by presenters and newscasters in British mainstream media, but our media gives no mention to the arms fairs we host in Britain, or the illegal weapons sales we facilitate which cause more casualties of war. Westminster Abbey hold a remembrance service in November in the very same space they held a thanksgiving service for nuclear weapons in May.

The phrase used in such remembrance services is ‘Lest we forget’, the idea being that if we should ever forget the tragic consequences of the atrocities of war we leave ourselves open to history repeating itself. But perhaps we focus our attention on those who died in service during the world wars in order to forget that war is a feature not just of our past but of our present, and to excuse ourselves from aiming to eradicate it from our future. We seem reluctant to remember that war is not necessary, that wars are still happening, and that our country is not always the heroic saviour but is in fact facilitating untold harm to innocent lives.

So whilst we make a personal choice about what poppy we shall wear or what services of remembrance we want to attend this November, let us try to remember not only the tragic past but also that our job for the future is to ensure that preparations for war should cease; to seek peace and pursue it. (Isaiah 2:4; Psalm 34:14)

Is There Hope In The Current Political Climate?
No Faith in War: Reflections from the Arms Fair