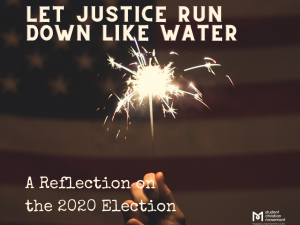 In 2008 I had just finished high school, and I was off to a Christian college in downtown Chicago to learn about Christian Ministry. I hoped to partner with the Holy Spirit to see lives transformed and communities impacted by the gospel; after all I only made to university because of the help and finances of my church family and good teachers believing in me when society had conditioned me not to believe in myself. That same year the US experienced the worst recession since the Great Depression. I saw many people lose their homes, jobs, and sometimes relationships because of this dire economic situation. Things were bad, and for the first time in my life I was able to vote. I grew up in the Jehovah's Witness family, which means I grew up apolitical, so I did not have ties to a particular politcal wing. But I did trust my faith and the people around me to help inform me. I quickly realized there was a disconnect between my own experiences and the white evangelical teaching around me. I had seen earlier that year the dangers of guns through a school shooting on my 18th birthday; I saw many people die because they couldn’t afford life saving medicine; I saw how social welfare, the value of public (state-funded) education, social housing and food stamps were helping people around me.

Despite this, when it came to voting for my own senator (Barack Obama, who was running for the President of the United States) I didn’t vote. I was working for the Chicago Election Board the day of the election. but I did not vote for him because the conservative Evangelicals around me told me not to, that he was against 'family values'. That night in a packed park, only a mile from where I lived, Barack Obama made a victory speech. I chose not to go because I knew there would be backlash if I went. Students and staff walked around my campus in mourning for the next few months because the election didn’t go their way. I saw embittered Christians upset and holding true to their convictions. I saw the Christian Right close up, and they were not backing down.

Fast forward to 2016, and I was now living in the UK. I saw the election unfold before my eyes; I was sure Hillary Clinton was going to win. But I had forgotten about those embittered white evangelicals who hold so much power in the American political movement. For them, Donald Trump was the means to create a conservative Evangelical America. He wanted America to go back to the 'golden years'. (The question I wanted to ask is, “When exactly were the golden years? When was America great?")  As Donald Trump began his first term in office with scandal and a morally disappointing record, I thought the evangelical church would, to speak in modern terms, cancel him. But they never did. Instead his support from the evangelical church grew. I was bewildered because as a young child I remembered when Bill Clinton was accused of having an affair with a woman who wasn’t his wife. This upset people of faith and no faith alike, because many Americans believe the President of the United States ought to have a high moral code. The President ought to at least follow his marriage vows! But this time was different. Evangelicals saw Donald Trump as not necessarily a leader with Christian morals, but a leader who could enact coverservative political action in the US. Within American Evangelical thought there is an understanding that if we gain power then we can influence the country to become Christians, and Trump was their way to do this.

Today, 4 years later, the political landscape sadly doesn’t look much different. We are less than two days away from Election Day. Many people have voted early due to Covid-19. The country and many Christians are still divided on who to vote for. Issues like women's reproductive rights, gay marriage, trans rights, tax rates and many more are the ones at stake. The Christian in America must vote for the political leader who their conscience can lead them to. I believe that for many Christians in the US, the questions around the election and the reaction afterwards will reflect the Christian faith to the public far beyond any words. These are difficult times we all living through. But I know my ancestors fought too much for me to be passive about playing my part in the political landscape. My prayer for each American Christian is that they make their decision not based on what they can get from each candidate but, in the words of Prophet Amos, to "let justice run down like water, and righteousness like a mighty stream."