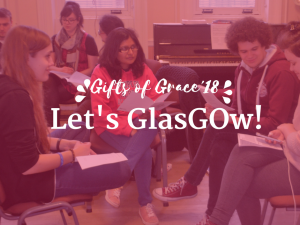 It was 7pm, and Tom and I were slowly beginning to realise what on earth we’d let ourselves in for. 12hrs later, (yep, 7am!) and on about 2 hours sleep, we arrived in Glasgow for my first time north of the border! The lovely leaders of SCM Glasgow came to meet us, showed us around the city and made sure we had food and a bit of rest. We then got stuck right in to the programme for the weekend, after some wonderfully Christian icebreakers and getting to know each other a bit.

The weekend focused on forgiveness and reconciliation, and it made me think about them in ways I’d not considered before. We had a talk from David Kenvyn, who took us through his unwavering and committed involvement in the anti-apartheid movement in South Africa. It was both thought provoking and incredibly moving and allowed us to begin to understand the power of persistent and tireless activism. Another stand-out moment for me was the workshop on forgiveness led by Jo Russell, which highlighted some really important points. She spoke about how, when forgiving people, it’s not just about moving on – it’s about recognising you’ve lost something you won’t get back. This could be something material, but it’s just as likely to be time, or a relationship, or something similar. I think it’s safe to say that everyone gained a lot from that session, and it left us with a lot to reflect on throughout the weekend. Our third guest, Rabbi Kate, led a wonderful session on forgiveness in Judaism, giving us all a profound insight into her Jewish faith, and Jewish practices around forgiveness.

The weekend definitely made me feel like part of the national movement, and the opportunity to share life with others (however briefly!) was really significant. Being in Southampton, we sometimes feel a bit detached from all the exciting SCM goings-on, but I’m so glad we made the journey up. It was so great to be surrounded by people who both *get* you and challenge you at the same time. SCM Glasgow did a fantastic job of organising everything, and it’ll be a tough act to follow! I’m really looking forward to the events to come, hope to see you there!

Tags:
Forgiveness
< Back to all blogs